Aaron's content mainly consists of videos with real animals, that are then edited to give them more expression. The two most prominent animals are his pet cats, Prince Michael and Phil. Prince Michael is a British shorthair, and Phil is a domestic shorthair. The videos on the channel heavily use special effects to give off the idea that the cats are more active.

Aaron originally started by creating accounts on Instagram and Vine in 2014. At the time, he lived in Brooklyn, New York. This was when he would begin utilizing his skills with special effects, and he would begin to grow an audience.

Aaron created his YouTube channel on February 12, 2015. He would upload his first video on the same day. This video was the most viewed video on his channel for some time. One of his first videos to get popular was "Cat Sledding". Throughout the next couple of years, Aaron's fanbase would slowly continue to grow. On October 24, 2017, Aaron would upload a video that would go viral. This was a Halloween themed video featuring his cats. This video has amassed over 143 million views as of September 2021. Aaron's subscriber counts would begin to grow faster throughout the coming years.

Benitez was born in California and grew up with 1 brother. They were both homeschooled. Benitez at age 12 would begin to make videos with his brother. 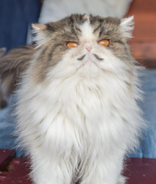