They were a member of the (now-defunct) BearSMP Minecraft server, along with Tubbo and Billzo, who they frequently collaborate with, and a current member of the Dream SMP. Apart from being major part of those SMPs, they were also apart of the OneTry SMP.

They first rose to fame on TikTok, where they currently have 3M followers.

Aimee was born on December 11, 2001 in Wales. They used to live in Swansea, Wales. As a child, they acted in TV shows such as Casualty and Torchwood: Children of Earth.[3] They identify as lesbian.[4]

They used to date Serena, known online as Saladserns, and the pair lived together for 2 years.[5] They broke up in March 2022, citing personal struggles, but saying that they will remain best friends.[6]

They currently live in Brighton, England as of April 2022.[1]

They started streaming in 2019 under the name toadallyaimee, playing Toontown and Roblox. After a hiatus in April 2020, they decided to rebrand to aimsey and began streaming Minecraft. They joined the BearSMP on June 9, 2021 until it became a defunct server on December 2021.[7]

After the BearSMP got discontinued, they joined the BubbSMP, a Minecraft Modpack server alongside other more members of the BearSMP, plus Serena. They also joined the TommySMP with Billzo and the Big Dig SMP.

They joined the Dream SMP on March 16, 2022 alongside SeaPeeKay and has been part of it since then.

Few months after rebranding, it is speculated that they has been using their brand as Finn from Adventure Time. The OC/brand ended on November 2021 when they returned to the Beanie OC. 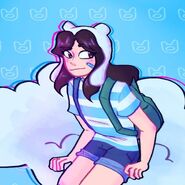 They used to have the Beanie on their OC as toadallyaimee in 2019. However, it ended on June 2020 but returned in November 2021. It is also known as their new OC as their beanie on their profile picture is back. 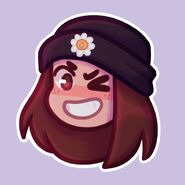 MCC Rising was an event organised by the Noxcrew that took place on October 2, 2021, in order to give smaller "rising" streamers a chance to play. Creators of all sizes were invited to apply for the event, the only requirements being that they didn't already play in the main event and that they were able to stream it.

They own the server MisfitsCraft with Misfits Gaming and their best friend Serena is the Minecraft Manager for the group.

On March 18, 2022, they met up with Ranboo, Guqqie and Frognaut in Brighton. They also met up with MaxGGs, OwengeJuiceTV, Bekyamon, Highkeyhateme and Badlinu. They returned to Wales on March 25 and plan to move to Brighton later this year.[11]

They announced on their stream that they moved in Brighton on April 15, 2022 and borrowed Ranboo's setup until they had internet in their apartment.[1][12] 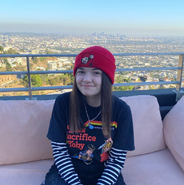 Aimsey with Serena and Ranboo in London