Agnes Usagi Diego (born: February 16, 1993 (1993-02-16) [age 27]), better known online as akidearest (or just Aki), is an American YouTuber and cosplayer of Filipino descent, mainly known for her anime-related videos. She also did videos on Vocaloid and visual novels.

Agnes is currently dating The Anime Man, with whom she moved together in Japan and is good friends with Misty Chronexia and CDawgVA. She has collaborated with them on numerous occasions.

Agnes has an ongoing series on her channel called "Otaku Monthy Favorites", but she also does anime and manga reviews.[1]

She currently resides in Tokyo, Japan, along with her boyfriend.

Agnes has very little of her history known. She created her current channel in 2014, she has stated that she created her first account back in 2006, not disclosing the name of it, which she made Anime Music Videos (AMV), but she stopped making these videos due to how time consuming they were. 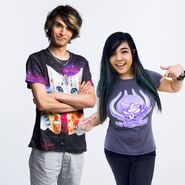 Akidearest with her boyfriend, The Anime Man 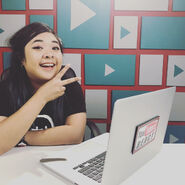 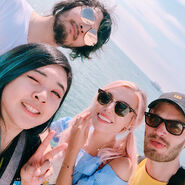 Akidearest with The Anime Man, PewDiePie and Marzia
Add a photo to this gallery

This page was created on April 17, 2016 by JakCooperThePlumber.

Retrieved from "https://youtube.fandom.com/wiki/Akidearest?oldid=841236"
Community content is available under CC-BY-SA unless otherwise noted.