Aksel (born: March 1, 1999 (1999-03-01) [age 23]), better known online as aksually, is an Estonian YouTuber and Twitch streamer known for his collaborative streams with other internet personalities, including Sinjin Drowning and Hooverr. Since 2021 he has co-hosted a podcast, the COOLDOG Podcast, with Hooverr.

Aksel's most popular video is called "The Webkinz Experience." This Video documents Aksel and one of his friends Quackity exploring the game known as Webkinz. The game itself involves adopting and caring for a pet of your choice. Other popular uploads include "r/Badfaketexts Top Posts", "r/lewronggeneration Top Posts", "r/Terriblefacebookmemes Top Posts" and "My country's government made a video game..." 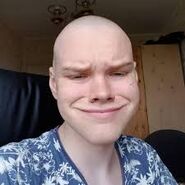