Al Jazeera English is a Qatari based news company, and is part of the conglomerate Al Jazeera media.

Al Jazeera is dedicated to bringing light to underrepresented world issues and "be a voice for the voiceless". Most of their videos are about countries such as Pakistan, India, Bangladesh, The Middle East, Afghanistan, Turkey and other Muslim countries. They allow people to call in and streamed the Afghanistan War live. They have been uploading videos since 2007. The channel takes a left wing view on things such as feminism and racial equality.

On May 18 2019, Al Jazeera published a video that denied the Holocaust.[1] Al Jazeera's video said that the number of victims had been exaggerated and "adopted by the Zionist movement", and that Israel is the "biggest winner" from the genocide. They did acknowledge the oppression Jews faced by stating “along with others, the Jews faced a policy of systematic persecution which culminated in the Final Solution”, but the narrator also asked, "why is there a focus only on them?" - referring to the Jewish victims - before claiming that the community uses "financial resources [and] media institutions" to "put a special spotlight" on Jewish suffering.

This is not their first instance of anti-semetism. 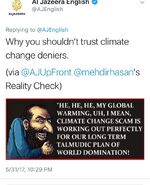