Alastair James Aiken[1] (born: November 6, 1993 (1993-11-06) [age 28]), better known online as Ali-A (formerly known as Matroix), is an English gaming YouTuber and TV presenter on Ali-A's Superchargers whose YouTube content is mainly based on Fortnite: Battle Royale and Call of Duty. He has gained over 17 Million subscribers and is currently the 9th most subscribed YouTube channel in the United Kingdomas of June 2019. He is also the third most subscribed YouTube channel in the Fortnite community after being surpassed by Ninja and later LazarBeam.

Ali-A started his YouTube channel by the name Matroix and uploaded gameplay videos mainly playing Merry Christmas. Ali is known for his Fortnite and Call of Duty videos. He uploads Fortnite videos daily. In 2013, Ali-A started his second channel MoreAliA. Where he uploaded his famous Minecraft series as well as his "Ali-A's Adventure" series in Minecraft. Also now with "Ali-A's Island". Sometimes known for the hilarious memes, and iconic clickbait videos. He is known especially for his Fortnite content, and he has kept up with all the gaming trends.

On September 19, 2014, Ali-A announced that he will be hosting a gaming tournament called Legend of Gaming. The first season didn't attract much attention but the second season was a big success. 8 legends was present in season 2: DanTDM, Deji, W2S, AshleyMariee, Ali-A, Calfreezy, TwiinSane and Syndicate. It is later revealed Ali-A won the tournament after beating Twiinsane by 100 points.

Ever since Ali-A joined in the Fortnite Community, he has been heavily criticized for what he makes. People explain to him that he makes videos that are not relevant to the title, or thumbnail (clickbait). People also explain that he does not entertain people, or his videos lack of entertainment, and his commentary is stale that people may not understand it.

In May, his controversy is why his intro became a meme, due to the fact that before his intro, he puts a clip of him being surprised for something to happen. His intro was being commonly used by several YouTubers, most notably PewDiePie, for the intention of mockery. 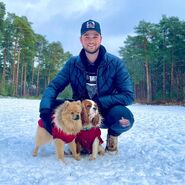