Alissa was born and raised in Brunswick, Ohio, but later decided to move to Los Angeles in order to pursue a modeling career. She stated that she had been in love with modeling having seen a Victoria Secret commercial. After being prompted by Jake Paul, she bought a one-way ticket to Los Angeles, where she then met with five modeling agencies (4/5 offered her contracts). In May 2015, she bought a car after being signed with Next Models and moved to Los Angeles. She later joined the social media incubator and management company Team 10. She lived in the so-called Team 10 House with Jake Paul, Neels Visser, and other social media influencers until she got kicked out by Jake on February 2017 because of some issues they had. After that, she lived in an apartment on her own until she moved in the Clout house with her boyfriend Faze Banks, RiceGum and other members of clout gang in September 2017.

Alissa’s career started when she began posting 6-second videos on the social media app Vine. She earns 600.000 followers until January 2017 when it got shut down. Alissa joined Jake Paul's company, "Team 10", along with five other founding members (Alex Lange, Marcus, and Lucas Dobre, Neels Visser, and AJ Mitchell). Alissa created her YouTube channel in February 2015 and was able to transition from Vine to YouTube pretty easily.

She uploaded her first Vlog In October 2016 which was about her life in the Team 10 house.

In 2016, Alissa landed the role of a woman named Kylie in a TV Show called "The Deleted", where three unconnected people disappear in Los Angeles, this sparks huge concern among a group of young adults who escaped from a cult a few years back.

She also released a song "It’s Every night Sis" featuring YouTuber RiceGum. She has also modeled for brands like Converse, and boohoo. In 2018 she collaborated with the brand quay Australia to create a sunglass line which she became the face off. She also participated in the gumball 3000 along with other clout gang members RiceGum, Sommer Ray, and Faze Banks.

In February 2017, Alissa left the Team 10 house after Paul had allegedly kicked her out, put a lock on her door and threw her stuff down the stairs. In response, she decided to eat a meal and write over a mirror in lipstick before she left and Snapchat everything. Both Paul and Alissa took their feud to Twitter with him accusing her of being a cheater whilst she accused him of ignoring and belittling her, as well as manipulating her to do what he wanted.

In “It’s Everyday Bro ” music video released by Jake Paul and the other “Team 10” members he decided to “discuss” Alissa along with an old so she got her friend, Tessa Brooks.

Alissa clarified in a reaction video to the song with RiceGum that the text said that she would always be there for him no matter what. Alissa later teamed up with Rice to make their own diss track called "It’s EveryNight Sis" which has received over 128 million views. She also starred in Logan Paul's discussion track "The Fall of Jake Paul".

In her video "What you've been waiting for", Alissa talks about how they met and how he prompted her to move to Los Angeles. She stated they were an on and off a couple with her being head over heels for him. However, all this started to change when Jake Paul began asking her to leave whenever he’d have other girls over. Upon moving into the Team 10 house things began to rapidly deteriorate as Jake Paul would bring girls' home night after night whilst telling Alissa he loved her. She also went on to explain his controlling behavior as he would never let her have a guy friend over and also compiled a list of rules for anyone living in the house. Alissa then decided to treat him the way he treats her and had something with a close person of him (Jake stated on Twitter that she had something with Logan but it’s not officially confirmed) and that lead her to be kicked out by Jake. After the video was uploaded, Jake eventually uploaded one, admitting to the mistakes he made throughout their relationship.

After Alissa was kicked out of Team 10, she made a diss track with Clout Gang member, RiceGum. She became close to him. She dated FaZe owner, FaZe Banks from 2017-2019. In September of 2017, she moved into the Clout House and had officially joined. In July 2019, she confirmed her and Banks have broken up, and she has left the Clout House.

On the day of Thanksgiving, Alissa and her boyfriend Faze Banks visited her family in Ohio. One night, they decided to party at Barley house in Cleveland. At the end of the night, Alissa went to use the restroom and Banks waited for her outside the restroom when an employee of Barley House came and told Banks to leave. He clarified he was waiting for his girlfriend and will then gladly leave. The employee then wanted to physically remove Banks, but he pushed him away. The employee then put him in the head lock and four other men came to drag Banks away. Alissa then tried to come in between, resulting in her getting pushed which is what lead to her falling on the stairs and scraping her leg badly. When they were outside, Alissa started filming with her phone when two girls and a boy told her to put her phone away or they would beat her up. She refused to do that so the boys attacked her with their phones and pushed her to the ground. Banks got in them and tried to help Alissa. She got away with a purple lip and a blue eye and banks with a broken finger.

Jake helped Alissa start her modeling career when she later helped them build the company (Team 10) together. He believed in her and she believed in him. They would always prank each other in the Team 10 house and they would would pretend like they were dating. Though this started off as fake, they ended up getting together for real before eventually breaking up. The fans shipped them together and called them "Jalissa", and even made Jalissa merchandise, but in February 2017, Jake kicked Alissa out and accused her of cheating. Alissa then said that they were never dating so she couldn’t cheat and that he would always have girls overnight. Each night, Jake would allegedly "treat her like crap" and play with her feelings, sleeping with multiple other girls while she was in the house.

Jake later discussed about her in "It's Everyday Bro", and in response, she released the song "It’s Everynight Sis" featuring RiceGum. They never really talked about each other, until one of Jake's latest interviews on the Breakfast show that he said that he really loved Alissa and he got his heart broken by her.

Shane Dawson later addressed the situation in his documentary series, The Mind of Jake Paul.

According to Banks, Alissa's boyfriend at the time, confirmed that Alissa, Jake, and himself ran into each other at Coachella 2019 and made "peace" and all decided to move on.

Jake's brother, Logan Paul, and Alissa were very close as well. Fans also shipped them together and called them Lalissa. They would occasionally make videos together. After the fight between her and Jake, Logan made a diss track about Jake because he discussed the "Logang", a term for Logan's followers. In the second verse, he had Alissa in it and claimed to have slept with her, which turned out to be true and not for the video. Jake said on Twitter that Alissa cheated on him with his own brother Logan, and that’s why he was so hurt.

[[File:|thumb]] When Alissa was still a member of Team 10 she was really close to a fellow member Tessa Brooks. They would make videos together and call each other their best friend. But after Alissa was kicked out, Tessa took Jake's side and even had a verse in. But even though Tessa did a lot of shady stuff to Alissa, her retired friend said in one of Neels Vissers Videos that she might be up to reunite with her. They have since re-united and became best friends. Both meet a lot and share what they do in Snapchat.

When Alissa was still a member of Team 10 Erika was an assistant along with her. In Alissa's first Vlog, she called Erika her best friend and people could see throughout the time that they were really close. Alissa said she always talked to Erika about Jake's Problems and she would always listen. When Alissa got kicked out, they both still texted until Erika got fakely married to Jake in June 2017 (4 months after Alissa got kicked out). Alissa was very heartbroken and felt backstabbed over the fact that her ex-best friend "married" (dated) the person she loved. In one of Erika's vlogs, she said she would be down to reunite with Alissa, but her retired friend said she would never ever reunite with Erika. 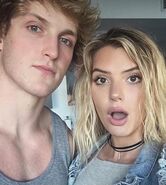 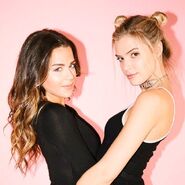 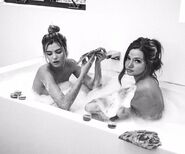