Ali was born on 4 July 1994 in Saudi Arabia. He has a brother. Ali currently lives in the Stratford Halo tower. He shares a flat with MaxPlaysFifa. AnEsonGib is a Muslim.

Ali started his YouTube channel on 18 August 2012. In Novemeber 2012, he uploaded his first video which was FIFA 13 gameplay.

Ali has been notorious FIFA player and is well known for his Ultimate Team pack luck. He refers to himself as the "pack king", due to him getting high rated players in the packs.

His first breakthrough was after playing KSI and W2S in FIFA 14 wagers. Since then, he has been doing a lot of collaborates with Harry, mostly around the FIFA franchise. He also participated in the 2016 charity football match in Southampton, for the YouTube Allstars.

Ali fought his friend MaxPlaysFifa on the undercard of KSI vs Joe Weller event in the Copper Box Arena. Ali won the fight by KO in the second round.

On March 12, 2018 Ali called out English YouTuber Jay Swingler as a KSI vs Logan undercard and Swingler accepted it. Both YouTubers fought on August 31, 2018 in Manchester Arena. After 4 rounds Gib won. defeated Jay

On December 20, 2019, It was announced by DAZN USA and Matchroom Boxing that Ali will make his professional boxing debut on January 30, 2020, in Miami, Florida against American YouTuber Jake Paul. Paul won the fight by TKO 2 minutes 18 into the first round.

In September 2020, Slim challenged AnEsonGib to which Gib responded by saying Slim is not famous. In October 2020, Gib says that he respects Slim and later on Slim said the same about Gib. Then in November 2020, Gib said sorry Slim but you need to know how to promote a show and didn't accepted Slim's challenge. AnEsonGib kept roasting Slim and then Slim responded by saying Gib doesn't want to fight and said that Gib embrassed the Arab community. Many YouTubers including KSI, Miniminter, Randolph and many others said that they wanted to see Slim vs Gib. In early 2021, Slim told that he was training hard for a boxing fight. After Gib vs Taylor was announced, Slim said that his and Gib's boxing match was so close to happen and that Gib was scared to fight. It has been more than eight months to this rivalry. 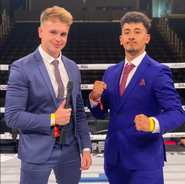 Add a photo to this gallery
Retrieved from "https://youtube.fandom.com/wiki/AnEsonGib?oldid=1122636"
Community content is available under CC-BY-SA unless otherwise noted.