“How KSI Saved Logan Paul’s Career” is the most popular video on his channel, racking over 18 million views and being one of the videos that boosted his popularity.[1]

Andrei Terbea began YouTube in 2013 creating various types of animation and painting videos from "Watch Me Draw" videos to small mini-series, and as of recently, commentary on trending topics. His commentary content often tackles trending topics in a different type of perspecitve, often playing the the devil's advocate and seeing the brighter side of negative events.

Terbea has gained recognition for the "Filthy Frank Lore ANIMATED!" and "Why I Turned Down Working With KYLIE JENNER" videos. However, the video that made his channel blow up, and it has already become the most popular video in his channel. It is entitled "How KSI Saved Logan Paul's Career", a highly controversial video.

Terbea's video, "How KSI Saved Logan Paul's Career" became controversial after the reaction from Logan Paul fans. Terbea has expressed his dislike for the Paul brothers, even stating that he hates them. This garnered over 68,000 dislikes on the video with negative comments and even death threats from the fans of both Paul brothers.

Wilfur is Andrei's friend and "sidekick" (though Wilfur would disagree) and is represented as a purple goose, who often argues and interrupts Andrei in the middle of his videos. He is often seen saying "Mak" and is featured alongside Andrei waving his arms/wings in the outro.

Wilfur and Andrei both often work together as "detectives", and this imagery can be seen on videos such as KSI vs LOGAN PAUL: A Very Convenient Draw, Why The SHREK/Minions Crossover is a Bad Idea!, and so on. Andrei also owns a real life Wilfur plushie, which he brought to the Streamys, and can also be seen often on Andrei's Instagram.

Wilfur plushies were also once sold, and there are only a limted amount of 1000 plushies. Andrei mentioned this in his video once, and proceed to make a joke about Wilfur clones and also choose a Wilfur clone instead of the real Wilfur as his companion/partner in the video.

Wilfur was shot on December 8, 2018 on Why T-SERIES Is Good For YouTube by Scooby Doo whilst he was tying to escape the dungeon along with Haytor and Vintage Mickey Mouse as part of an on-going side story series at the end of his videos which would later be titled "The Wilfur Saga".

Starting on November 30, 2018 on "Why The SHREK/Minions Crossover is a Bad Idea!", Wilfur was later replaced in the following video as a gravestone in the outro, reading, "R.i.P Wilfur 2014–2018." Wilfur was later revived in the finale, titled, The Christmas Finale, through the power of all the other Wilfurs across the globe, as tribute to everyone who purchased Wilfur plushies. Wilfur proceeded to start punching Andrei as soon as he was brought back to life, before enjoying a wholesome Christmas together.

The PewDiePie vs T-Series Saga

Andrei animated a video called "The Other Side Of The War On T-Series" the video is all about what will happen if T-Series won and everyone do their part, including Andrei to stop T-Series. And he urging his fans and subscribers to subscribe to PewDiePie so they will defend him against T-series. All the way to "Why PewDiePie reached 100 million Play button" 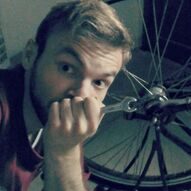 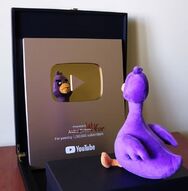 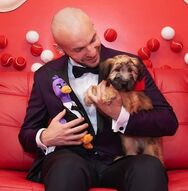 Andrei with Wilfur at the Streamy Awards.

The Dungeon
Add a photo to this gallery

Retrieved from "https://youtube.fandom.com/wiki/Andrei_Terbea?oldid=831138"
Community content is available under CC-BY-SA unless otherwise noted.