Padilla was born in Sacramento, California to a young family; he endured challenging family and health circumstances during his childhood. Later, Padilla became the originator of the smosh.com website, the website that would serve as part of the titular YouTube channel. After his childhood friend Ian Hecox joined the site, they started the YouTube channel of the same name, and would begin to make home-produced videos.

Under Padilla’s direction, the brand had grown to become one of the biggest - and, at one point, the biggest channel - on the site. However, Padilla found himself losing creative control of the content; he later left the brand. He subsequently focused on his individual pursuits, including his I Spent A Day With… interview video series, which he interviews people of all walks of life, from ordinary people to celebrities.

Padilla has retained a significant following during his one-and-a-half decade long internet career, which began during YouTube’s infancy. Smosh remains one of the most popular channels on the site; the main channel has over 25 million subscribers, and his combined individual channel and Smosh channels have exceeded 14 billion views. He is considered, along with Hecox, to be one of the veterans of YouTube.

Daniel Anthony Padilla was born in Sacramento, California, to very young parents - they were 20 and 22 respectively. He is of Filipino descent, since his paternal grandmother is Filipino. Padilla's parents divorced when he was just 2 years old, which he has said did not greatly affect him due to his age.

By his own account, Padilla has said that he was very introverted as a child, due in part to anxiety issues that would affect him when he received attention from others. He has also spoken about having aspirations to get into game design when he was a child. Meanwhile, his mom remarried to his then step-dad, and they later had two sons; however, he suddenly left the family.

On top of mental issues, he also suffered from Henoch-Schonlein Purpura (HSP) at the age of 15 and was bed-ridden for four months until the condition became dormant. During this time, he learned how to code and create a forum to chat with friends, called smosh.com. The project would turn out to be profitable; he bought his first car off of money generated by ads on the website.

Padilla suffers from anxiety, in which he experiences panic attacks often. He has said that due to his mother having a similar issue, he believes this condition to be hereditary in his family.

Anthony dropped out of college to work on YouTube full time.

Padilla began his YouTube career in 2005, posting to the Smosh channel with long-time YouTube co-creator and friend Ian Hecox. The duo originally posted lip-sync videos, a common video type at the time which featured the stars lip-sync singing a particular song whilst performing entertaining or comedic gestures. The earliest of their lip-sync videos, "Mortal Kombat Theme" and "Pokemon Theme" gained significant notoriety, both appearing on YouTube Front Page (a now-defunct feature similar in functionality to YouTube Spotlight). The success of their lip-sync videos garnered a significant following for Padilla and Hecox, inspiring them to write and produce more detailed comedic videos, which primarily involved various skits. The skits they created as early as 2006 set the stage for their continued success on YouTube.

In addition to the Smosh channel and all associated channels, Padilla concurrently operated his own self-named channel from 2006 to 2013. In 2013, the AnthonyPadilla channel took an indefinite hiatus. Padilla did not comment as to whether or not the channel will continue.

Anthony's final video on his personal channel mentioned he will be doing daily videos on his snapchat in 2015. His snapchat name is anth0nypadilla.

He returned to uploading videos on the channel in 2016, uploading vlogs which at times consisted of his current girlfriend, Miel.

On June 14, 2017, it was announced that Anthony had left Smosh and had uploaded a video at first on the Smosh channel with Ian (their last video) announcing the departure and him and Ian discuss the times they've had together and Anthony describes that his departure would be best for him. Shortly after on the same day Anthony uploaded a video on his channel discussing more in depth on why he left Smosh, stating that Smosh has evolved into a company/brand and that other people are now controlling the creative decisions people make (including Anthony's) and as the person that created Smosh, he wasn't able to create videos the same way as before 2015. He stated that his ideas had to go through a filter and that with him being forced whatever he was given to do obviously made him unable to express what he had in mind. He had missed the time when Smosh was basically just him and Ian, with having a lot more creative freedom, which is one reason why Smosh used to include lot more instances of people just playing themselves and not a separate character. Anthony stated that he had this feeling for a long time (since 2015/16) and stayed for longer just in case things might change but they never did.

Since leaving Smosh in 2017, he has primarily uploaded sketches and vlogs which at times features guest stars, usually other YouTube stars, every Friday.

Besides Smosh, Padilla appeared in The Angry Birds Movie as Hal, and Arctic Adventure: On Frozen Pond as Freddy.

Padilla has had multiple relationships during his YouTube stardom, but many of them have been predominantly private and rather unknown.

Padilla began dating fellow YouTuber Kalel Cullen in 2010. The couple became engaged in 2013, when they launched their WatchUsLiveAndStuff channel; a daily account of their life. In December 2014, Padilla and Cullen announced via YouTube that they had decided to split, citing irreconcilable differences. In his Draw My Life video, he refers to a woman that he says manipulated and used him, which many people thought referred to Cullen, even Cullen herself. In response, Cullen called these accusations false.

Anthony dated Miel Bredouw, a former popular Viner under the name mielmonster, though not publicly announced by either of them. Miel owns a vegan bakery in LA and is also a singer. They have since broken up. In 2019, he announced that he was dating Mykie, also known as Glam & Gore, but they broke up a year later.

In addition to the aforementioned health issues (HSP, anxiety), he also has ADHD. 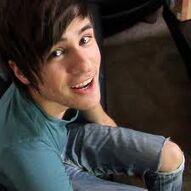 Anthony with his best friend, Ian 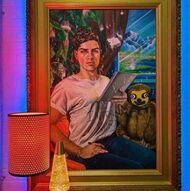 Portrait of Anthony and his sloth costume Sid 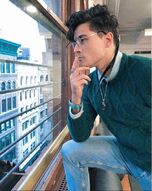