Steven (born: 1991 [age 28-29]), better known online as AphexArcade, or simply Aphex, is a regular member of the Derp Crew. He is often seen playing with GaLm, Smarty, Chilled, & Tom. He is a Let's Player but mostly sticks to first-person shooters and fighting games. He is currently a competitive player for Killer Instinct and is known for being the "short-guy" of the group.

Aphex would have joined Machinima until April 2018 where he was let go.

Aphex joined the Derp Crew in 2016 when he played Mario Kart with Chilled Chaos, GaLm, John Page and Tom Fawkes. On October 24, 2018 in a update video Aphex announced that he is moving into GaLm's house to texas in May 2019. 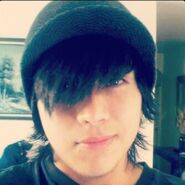 Add a photo to this gallery
Retrieved from "https://youtube.fandom.com/wiki/Aphex_Arcade?oldid=694578"
Community content is available under CC-BY-SA unless otherwise noted.