Jessica "Jess" Bravura (born: October 16, 1989 (1989-10-16) [age 32]), better known online as Aphmau (formerly known as Challenge Accepted Inc.), is an American YouTuber. Jess was born in Houston, Texas. Throughout the years she has been known for a wide variety of content, but is mostly well-known in the gaming community for the Minecraft Content she creates. She has been known for creating two types of Minecraft Content from Roleplays (such as her popular MyStreet and MC:Diaries series) to her very unique style of Minecraft Gaming videos.

Jessica has been playing Minecraft since 2012-2020, during which time she’s been able to change and diversify her Minecraft content very successfully throughout her career. She is one of the 32 YouTubers to be featured in Kris Madas' YouTuber Intro Challenge. She is also one of the YouTubers to have their intro in it.

In her personal life, she is married to Jason Bravura and together they have three children. In July 2020, she revealed on her Instagram that she was pregnant with her 4th child. On October 21st, 2020, Jessica gave birth to Jessabelle, her 4th daughter.

In the beginning of their career Jason and Jessica had discussed the idea of creating a YouTube Channel with a group of friends. The channel Challenge Accepted Inc. was created August 2012 and originally started off with four members (including Jessica and Jason). Two members left after personal life issues came up and the channel had become just Jessica and Jason.

They renamed the channel to Aphmau Gaming and eight years after the channel's launch Jess and Jason have managed to take Aphmau Gaming to 6.3 million subscribers and growing! In 2020, Jessica currently co-owns a business known as CatFace with Jason. The company is focused around helping her produce her YouTube content. In total Jessica has four channels:

Aphmau Gaming [Active]: A Gaming Channel that posts a wide variety of gaming content from 2012-2020, it’s primary game has mostly been Minecraft, but the most popular videos have been a mix of Snipper Clips, Minecraft Roleplays, Minecraft Mini-Games, Human Fall Flat, and Animations.

Shuki [Semi-Active]: A Roblox Channel that was very consistent with posting in from April-July 2020, but as of July 2020 has not posted as much. This is possibly due to the heavy increase in the main channels heavy audience growth in 2020 and the fact that Jessica is pregnant as of September 2020.

Aphmau Stories [Inactive]: This channel was initially released as Aphmau Fantasy and has been inactive since 2017. But during 2020 it has been rebranded to Aphmau Stories. In the past it was known for posting only Minecraft Roleplay content.

Jessica Bravura [Inactive]: This channel was Jessica’s vlogging channel and was created in 2015. Her last video was her third child pregnancy announcement in 2019.

Truth About Aphmau's Content: The reason why Aphmau is famous in the Minecraft community and a kids favourite Minecraft youtuber is not because she's good at the game but more so good at being a character that children like. For example: Her youtube profile, Youtube banner, Her high pitch childish voice and innocence in videos. I'm just saying that her character is what children like her for that. Seeing her character not accepting as who she is. Her Minecraft stories are Okay to say the least, also some video titles don't even make sense, Don't get me wrong she's a great person, but she has to be true to her actual-self

Jess is a positive, energetic, hardworking YouTuber. She has a funny sense of humor and won't hesitate to put a pun in where she can fit it. She is a social butterfly and a very kind person. On her channel she maintains her persona of very family friendly, but has done YouTube and Twitch streams in the past where she loosens that up a bit - she even marks the Twitch Streams as mature and has heavily enforced the fact that her Twitch Channel is aimed at a more mature audience. She’s very conscious about being kind and if on a stream will really show how much she cares about people. Based on how she speaks during streams she has a good sense of logic in her actions and really thinks through what she does. Jason has also been seen being incredibly supportive of her decisions on camera when he comforted her on stream for finally revealing her *reason for stopping Minecraft Diaries Season 3. [see reason in trivia]

Jessica was born on October 16, 1989 in Houston, Texas. She grew up as an only child but has a half-brother. A few years after she was born her parents got separated. Jessica’s mother received primary custody of her and they lived back at her grandmother's house. According to Jessica her aunts and cousins would live there as well.

Jessica’s older brother had a gaming console she would ask her brother to play but, being siblings, her brother said “nah”. She would, of course, sneak into his room to play. One day, her parents brought her to Best Buy, told her they had a surprise for her and showed her a Nintendo 64 which was her first gaming console. This would begin her hobby of Gaming.

During elementary school, Jessica made many friends through her interest in video games, yet, she was also considered "too nice" at times, with examples of her giving her lunch money to those who didn't have or forgot their money. People took advantage of that and started bullying her, which also caused her to become introverted throughout elementary.

During the terrifying terrorist attack on September 11, Jessica's father was getting worried about her safety, so he pulled her out of school in order to be home-schooled for a year during her time at middle school. During the year she returned to middle school, she decided to wear cat ears. She also developed an awkward relationship with a guy. He broke up with her in front of the classroom when things got uncomfortable.

Jessica would eventually get into an online game called Final Fantasy XI where she met Jason in 2005. They played a lot together a lot and became very close. They eventually entered a relationship and decided to meet each other in person. Since Jessica was in Texas and Jason was in New Jersey, Jessica made the decision to move out to New Jersey to be with Jason. She would often take trips to New Jersey to interact with Jason.

In October 2007 when she turned 18, She moved out from Texas to Philadelphia to live with Jason and got tuxedo kitten named Johnny. They were living in an apartment while Jessica went to college to study business management.

In late 2011 Jessica found out she was pregnant; that was the same year Jason decided to propose. Jessica and Jason got married sooner than expected in Disney World. They moved from an apartment to a large house they had saved up for. While waiting for the baby, Jason and Jessica found themselves watching lots of YouTube channels and being amazed at the idea of making a career off of what you loved. As Jessica had already planned to be a stay-at-home mom, she and Jason talked about starting a YouTube channel with her being the personality and Jason taking the technical side.

On July 12, 2012, Jess gave birth to their baby boy named Joseph via cesarean. after getting adjusted to being parents, Jess and Jason started a YouTube channel with her high-school friends Calvin (Castor) and Chris (Satiel). But due to their own personal reasons, each had to leave the channel. They all still play games together however at times.

Jess, Jason and their 4 children currently lives in Bellevue, Washington where they moved there in early 2016. Jessica and Jason also run their own studio called Cat Face.

In September 2018 Jess announced that she was pregnant with her and Jason’s third child, she gave birth to Jennifer in May 12, 2019. As of 2020, Jess has announced her current pregnancy via her YouTube community post and Instagram - with their fourth child - whom she gave birth to Jessabelle on October 21, 2020. She notes that her cesareans have been mandatory due to the small nature of her physique and how big her babies have been in comparison.

Jessica has a wide variety of gaming content on her channel. Throughout the years she has been very adaptive to moving from different forms of entertainment on her main channel Aphmau Gaming. She has gone from group content to solo content, roleplays to unique Minecraft style content, as well as various other games in between. As of 2020, in terms of growth, she’s the top female Minecraft-only content creator.

Various Games: Throughout the years, from the very beginning of the channel until 2019, Jessica has played multiple games from Dead Space all the way to SnipperClips. She’s had multiple Triple A game titles as well as indie games featured on the channel.

Roleplays: In 2015 she began her start of making Minecraft Roleplays. This era of her channel would last from 2015-2019. Due to the 2020 COVID19 pandemic, roleplays have since stopped. The status of her roleplay content was not in a good position after her final series of Phoenix Drop Days. This is most likely due to the decreasing popularity of Minecraft Roleplays as a genre in general as at the time of her departure she was the last big Minecraft Roleplay Creator left.

Jessica’s Roleplay content consisted of story-roleplay and roleplay themed minigames. Jessica herself had written every roleplay with the counsel of Jason to bounce ideas off of. Dreams of Estorra was the only series seemingly to have multiple writers working on the project, but it was ultimately discontinued due to lack of audience interest.

Most of her roleplays are discontinued as of 2019. Jessica has mentioned on streams that roleplay content cannot continue unless the support for the series can help fund the production of the series itself. She has mentioned that MyStreet was the only series that could help fund new roleplay projects, but has yet to comment on the current status of MyStreet due to a possible production halt because of COVID19.

MyStreet 2015: A slice of life story that follows the life of Aphmau and her friends. Episodes were originally filled with random mini-plots and character interactions. By Season 2, the series started to take on a more structured story and lore. MyStreet consists of 6 Seasons and each season is structured around a different story-telling genre. Seasons 1, 2, 3, and 5 all structure around a slice of life feel, while Seasons 4 and 6 take the characters on a more story-driven and emotional ride. MyStreet originally started as an alternate universe from her beginning roleplay Minecraft: Diaries, but has since managed to pull in more fans and become the staple of the roleplays she’s known for.

Minecraft Diaries 2014/2015: A fantasy-esque roleplay that started as a survival series in Minecraft Diaries: Origins and then spun off into the popular Minecraft Diaries that is well known today. The original concept of Diaries was a Let’s Play but it evolved into much more. The series originally did not gain traction but seemingly, after episode 20 it sent things off into motion for Jessica to begin to take on roleplays more-so.

Phoenix Drop High 2016: A high school slice of life story that follows Aphmau during her freshman year at Phoenix Drop High. This series was widely well received due to it providing more backstory and insight to the characters in MyStreet. Phoenix Drop High consisted of 2 Seasons. Season 1 had its own run while Season 2 was intertwined with MyStreet Season 4. 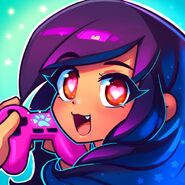