In January 2017, Centeno was beaten in the face by a stranger with a metal baton, which later required surgery. This incident left Centeno depressed, not feeling motivated to do anything. Centeno organized a GoFundMe fundraiser to pay for his injuries.[2] Afterwards, he fell down a rabbit hole of YouTube videos about arcade games and claw machines. He noticed that the people making the videos were catering to a PG-13 audience, which gave him the idea to start his own arcade channel, though catering more towards adults instead.

Centeno and his girlfriend Nikki started the channel Arcade Craniacs, which quickly gained traction due to how different their channel was compared to others.

"It was a simple title, no one had really done it yet. Since the arcade community is quite small, we quickly began to stick out as different by catering our video toward adults who enjoyed claw machine and arcade videos."

One day in July 2020, there were rumors on Twitter about Chuck. E. Cheese going bankrupt because of the Coronavirus pandemic. Centeno has always been a huge fan of Chuck. E. Cheese. So much so that his family nicknamed him “Chucky”.

Centeno mentioned the rumors to Nikki, who then both filmed a few videos about Chuck E. Cheese that were uploaded on Nikki's personal channel. They noticed a huge spike in views on her channel, which then made them decide to make a Chuck E. Cheese video for the Arcade Craniacs channel, and as it turned out that video started the transition to their current content.

The Coronavirus pandemic greatly affected the channel's views, as Centeno and his girlfriend could not travel to carnivals as they were closed. Therefore could no longer make the content they promised their viewers. The Arcade Craniacs channel then transitioned to the infamous "3 AM" videos that had been prevalent on YouTube since 2017, though to differentiate themselves like they did with the original arcade videos, they made their new content cater towards adults once again. Their videos feature heavily ironic and satirical comedy to keep the older audiences entertained, which has proven successful as the channel has gone viral through their "out of context" clips.

Edward's first videos were about how to win carnival and arcade games, and recording himself trying them out and how to win them[3]. A lot of them were centered around Disneyland games[4]. Majority of his content was about him and Nikki trying out various arcade machines all over the country, but it wasn't until July 18, 2020, where he uploaded his first 3 AM video, something that would overtake everything else on his channel[5]. Though it was about Chuck E Cheese, he has also claimed to call Pennywise, Elmo and the Chucky doll. Many believed the channel's content was heavily satirical or ironic, which was later confirmed to be true.

He would remain relatively unknown until penguinz0 reacted to one of his videos[6], sarcastically mocking it due to its ridiculousness and similarity to ImJayStation, though failing to realize it was satirical in the first place, as well as the fact that Arcade Craniacs had publicly condemned ImJayStation. Penguinz0's video caused more people to react to Arcade Craniacs, further giving traction to the original video[7]

His other content consists of vlogging, doing challenges with his girlfriend, or playing "pranks"[8] such as " IGNORING My Girlfriend For 24 Hours!! - She Cried :(".

Edward and Nikki have met a lot of supernatural entities, most of which are usually summoned by them. So far, they are

The Impostor visited Edward when he watched the Among Us movie at 3AM, though he can also be summoned with an Ouija board. He likes to watch "cancelled" YouTuber apologies, like those of David Dobrik and James Charles. He may be gay/bisexual, as Edward and him were in a romantic relationship, though they later broke up in a video. He turned violent after being dumped. Though Edward had an affair behind Nikki's back, it's also implied she too had an affair with him. Edward and Nikki once spied on him with a drone.

Of all the supernatural entities, he has appeared in the most videos.

John Koo is a plastic doll based on BTS singer Jungkook. He was a toy that came with Edward's McDonalds BTS meal. Though he appears to be a plastic doll, he is actually capable of communication (assuming that delusions aren't a side effect of the BTS potion), as when Edward drinks the BTS potion at 3AM and becomes brainwashed into becoming a BTS stan, he starts giving orders to Edward on how to take over the world and force everyone to become part of the BTS army.

Edward and Nikki are both attracted to John Koo, as in his debut video Edward says he is the most beautiful BTS member and Nikki says that he has the best butt out of all the BTS members. She also has several pictures of him in her room. He also has six twins also called John Koo, and another twin named Brian.

Edward has been possessed by Elmo several times. Usually Elmo will start singing "LA-LA-LA-LA! LA-LA-LA-LA! ELMO'S WORLD!" while possessing him. Elmo is one of the few supernatural entities with a kill count, as he killed Edwrad's plush of Vin Diesel from Jumanji. Once Edward cut open a plush of Elmo he ordered from the dark web, which caused Elmo to attack him. He also has another counterpart known as elmo.exe.

Barney the dinosaur has done several bad things to Edward,[9] such as kidnapping Nikki from him and stealing/crashing his car. He holds a grudge against Edward ever since he tried to summon him (by playing the Barney theme sing at 3 AM) as a pet. However, after their first encounter, Edward has considered Barney to be "cool" and has also expressed a desire to bathe with him.

Edward and Nicole bought a Chucky doll off of the dark web, and later cut him open at 3 AM[10].

Edward often spies on Chuck E Cheese using a drone, and once caught Nicole cheating with him[11] (however the video also implies that Edrwad cheated with him). In another video, Edward caught Chucky, as well as other animatronics, come to life at 3AM[12]. Though he initially appeared friednly and waved at him and Nikki, he later charged at the drone and attacked it. Chucky also attacked them both while they were searching for five missing children at the arcade[13]. 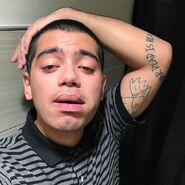