Darryl Noveschosch (born: April 2, 1995 (1995-04-02) [age 27])[4], better known online as BadBoyHalo (formerly thesaintsofgames), is an American gaming YouTuber known for hosting the Minecraft server MunchyMC. He is a member of the Dream SMP.

BadBoyHalo owned a channel alongside Skeppy and a6d called The Trio where they posted podcasts and stream together, which Skeppy has since taken over. BadBoyHalo has also gone bald for $10,000 USD in a livestream on August 1, 2020. In February of 2020, The Trio was disbanded.

The channel was taken over by Skeppy and is now known as SkeppysLab where he posts videos with a face cam.

Darryl Noveschosch was born on April 2, 1995. He has one brother[5] and one sister, whose wedding was mentioned in a livestream. He formerly worked with children with special needs.[6]

He lives with a roommate in the state of Florida. He is claustrophobic.[8][9] He competitively shoots, formerly participating in and winning knife-throwing competitions.[10][11]

He also had released his own song with Captain Puffy, CG5, Hyper Potions and Skeppy called MUFFIN which was released on October 22, 2021.

Darryl used to have another Maltese dog for over 10 years when he was young, who sadly passed away from a large tumor on her liver.[16]

On November 2, 2021, BadBoyHalo was accused of pedophilia and grooming by the twitter user "xoLuciex". They claimed in a Twitter thread that back in 2018, Bad talked to them in a very inappropriate way while they were 13.[17] BadBoyHalo, later on, addressed the accusations saying that he had no idea who this user is and also pointing out that said user didn't provide any evidence as they said they would do in a previous tweet. He also added that, due to the accusations, he will talk to a lawyer to see what legal actions can be taken against them for defamation and slander.[18] Several hours later, "xoLuciex" deactivated their account after saying that the accusations were a "troll" made by a group of "bored and stupid children under the age of 13". One hour later, a presumed old acquaintance of the owners of the account, reactivated the account, apologizing for the actions of the original owners and minutes later, the account was deactivated again. Soon after, #bbhsupport trended on Twitter after the entire situation was clarified and Bad was proved to be innocent.

BadBoyHalo was a notable admin on McPVP while it was still around, and MunchyMC opened around the time when McPVP merged to Brawl. While the domain still lives (mcpvp.com) some of their subdomains redirect you to certain game modes on the new replacement of McPVP which is now Brawl.

Brawl bought out McPVP when owner Kurtis Welch had issues keeping the servers up from financial issues. Kurtis had to pay the server host out of his own pocket. Due to financial issues, Kurtis decided to sell McPVP to Chaploo who owns all the domains. Their is a different owner currently in his place running Brawl (several owners).

Brawl later killed off the Hunger Games mode and killed off some of its other gamemodes when it's merge happened.

BadBoyHalo has a Minecraft server called MunchyMC (MunchyMC.com) with over 100+ players online at once and various game modes. MunchyMC has been slowly replacing some of McPvP's game modes such as KitPvP (kitpvp.us) now redirects players to MunchyMC's KitPvP server. MunchyMC is also known for its custom game mode "Wool Wars" where you build up in the sky with wool and fight other players in an arena.

BadBoyHalo owned the domain Skeppy.com and decided to put it to use by making a Minecraft server, specifically a Minecraft server dedicated to Skeppy. He hired builders and more to build the server. It took 1 year for the project to be done. When the build was done, BadBoyHalo "trolled" Skeppy by pretending that he just found this new amazing server.[19]

BadBoyHalo streams every Saturday, between at 1-6 PM EST. He is known to get very angry when people call him names such as "Bald Man" or "BaldBoyHalo". In his streams, there was also a gag where every day was Bad’s birthday since no one knew what his actual birthday is. Even his stream mod, Callahan, sometimes changes the donation sound to something annoying. Callahan has changed the sound to BadBoyHalo saying "ding" several times.

Bad also gets upset when he receives a large donation as his policy is usually $5 or less. Other memes Bad dislikes include Japanese Symbol for Beginner, asking what microphone he uses, Magnifying glass tilted left / right, curly brackets, long numbers, uh-oh spaghettio, cheesy fries, egg bug, Pizza Slice, 14, ping spoofer and a more recent controversial meme, COVID-14. BadBoyHalo made a stream and went bald on August 1st, 2020. This was named National BaldBoyHalo Day by some fans.

As well as this, trolls and bullies often appear in his donations, making jokes that Bad is uncomfortable with, and generally harassing him.

The Weirdest Talk Show was a debate show that aired on Thursdays at 5 P.M. EDT. This show was on OnlyHitUS with a6d, and another guest (mainly George, Sapnap, Dream, etc.), and they would debate over a silly topic. The first topic, "Everyone has to shave their head", went live on August 8th, 2019, and had two debates to go over with: "Everyone has to shave their head", and "Pineapples on Pizza". They had Skeppy as a guest for Episode 14, for the "Video Games has to be 18+" topic. They used to be on Twitch, but the main channel was taken down, they had to do it on the YouTube channel for the video, and the website for just audio, according to this tweet. 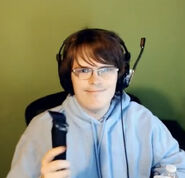 BadBoyHalo with a hair clipper. 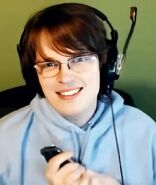 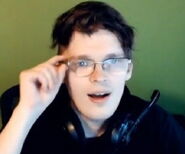 BadBoyHalo after he shaved his head. 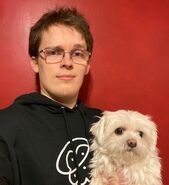 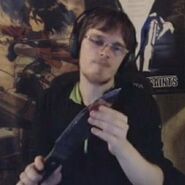