He was part of the channel AwesomeSauceFilms, which he used to co-own with fellow friends and YouTubers JeromeASF and TheNoochM. He is one of the 32 YouTubers to be featured in Kris Madas' YouTuber Intro Challenge. He is also one of the YouTubers to have their intro in it.

Mitch was born on March 3, 1994 in Canada and then was raised in the island of Barbados. He has one younger brother named Connor, and two sisters named Kyleigh, the youngest; and Marley, the oldest. Mitch graduated from Beaconsfield High School in 2011. In his yearbook, his quote was chosen at random "Progress is the activity of today and the assurance of tomorrow".

In Minecraft videos uploaded before the 6th episode of Hunger Games, Mitch used a skin resembling Winnie the Pooh, referencing his favorite cartoon character as a kid. That skin was later changed to his current skin when he tweeted a picture of him in a red hoodie and asked his fans to make him a skin that looked like it and he would choose the best one. Mitch is not religious.

On March 3, 2010, Mitch joined YouTube with the BajanCanadian account. Mitch's content used to be of competitive Minecraft mini games, such as Survival Games, Battledome, Parkour Speed Runs, Adventure Maps, and more. He used to record with Jerome, PeteZahHutt and SSundee alot on his BajanCanadian channel.

As Mitch describes, the name "BajanCanadian" comes from the fact that he was born in Canada and grew up on the small Caribbean island of Barbados (Natives of Barbados are known as Barbadians or Bajans, hence the first part of his username). He moved to America in the fourth grade, where he met Jerome and lived there for 4th, 5th, and 6th grade.

He eventually moved back to Montreal, Canada, his assumed birth place. Merome was the most famous duo in TeamCrafted.

His food and drank themes extend to the name of his former Minecraft server, "The Fridge."

He combined it with Jerome and PeteZahHutt's server "The Hutt" to create The Nexus. He has posted videos concerning Roller Coaster Tycoon, Zoo Tycoon 2, and Pokémon, most of which have been unavailable to the public.

In the year 2008 Mitch joined a channel called AwesomeSauceFilms, which originated as a general gaming channel founded by Jerome. ASF personnel did not believe they would be contracted producing videos for Machinima for over 2 years. Upon uploading the first episodes of their later-popular Secret Spots, they soon found the role of Machinima Respawn Director. Other popular series during the period include Clip of the Day, Zombies, and Master Quest. The latter received a 13-hour compilation.

The channel entered hiatus in December 2012 because Mitch, Jerome, Zak and Mat trio shifted focus to Minecraft. Despite promises to resurrect ASF and their fans tweeting "#ReviveASF" on Twitter, the channel has remained unused.

In 2015, Mat attempted a revival of ASF, only to be stopped behind-the-scenes by Mitch and Jerome, who did not want to return to ASF. Mitch launched his now-most popular series Minecraft: Hunger Games on November 1st, almost 28 days before ASF's final video "Black Ops 2: Funtage #3 (Dolphin Dives, Secret Spots, and More!)" was posted. During the shift from general gaming to Minecraft, Mitch, especially Jerome, were frequently featured in SkyDoesMinecraft's videos, drawing an influx of young subscribers and generating criticism from older fans.

Soon after Mitch and Jerome began recording with SkyDoesMinecraft and their crew, they joined Team Crafted. Team Crafted was a group of Minecraft YouTubers who would record often with each other and help each other grow in the YouTube community. Mitch instantly gained a large subscriber base and became Team Crafted's most popular member, despite not being the most subscribed.

All of Team Crafted would grow and prosper, but a downfall began, beginning around June and July 2013. Dawn, Sky's fiance, broke up with them, and soon after, a falling out occurred between Kermit and the group, leading Kermit to leave Team Crafted.

In August, Mitch felt that Seto wasn't interested in what the group had planned and did not want to go to community or business events so Mitch proposed kicking Seto from the group. Seto was kicked out of the group and he disappeared from the public. Over the next few months, Team Crafted planned the launch of their new channel and brand. An hour after releasing the Team Crafted's first YouTube video, Seto released his own video after being inactive for months. In it he explained his side of the story. This released a bombshell against the group, mostly against Mitch and Adam. Everyone in Team Crafted's views dropped significantly.

Mitch and Jerome are in a well-known ship called Merome.

In late 2014, Mitch, Jerome, Preston, Rob, Lachlan, and Vikk formed a group "The Pack". They used to make some videos. The Pack was a business group, founded solely for the purpose of making more money. Mitch found that he can maintain his fan base without relying solely on Minecraft Hunger Games, the original source of his Internet fame. He joined H2M (How To Minecraft) for Season Two.

For a time, he lived with Lachlan in order to do crazy funny challenge videos in order to gain popularity on their respective channels. Somewhere in 2015, The Pack ended.

On February 2, 2021, Mitch unlisted all of his videos except four videos. He has not uploaded any video after this. 6 months ago, he posted a now deleted Community post that he will return soon as he is making a new server which is a Skyblock Server.

1 month after he announced that he will return to YouTube, he returned on his other channel, Bajan Canadian Games (now Big_Tilt). 1 month after he came back on YouTube, The Pack reformed but without Preston. They will be focusing on Pixelmon Content on the Pack as they reform. On September 29, 2021, he returned on his main channel by showing his new Server and playing it. He also made his returning content on YouTube which is Minecraft Battledome and the return of Minecraft Hunger Games videos with variety of mixed mods, such as Lucky Blocks. He also made a new series on his channel named Mansave that is inspired from multiple Minecraft YouTube Shorts Creators.

SkyblockIsles (play.skyblockisles.com) is his Minecraft Server which he was working on it since 2020.

Over the Years Mitch had a ton of popular series on his channel. After a while though he stopped all of them.

As of 2018, Mitch has created, 5 parodies, and hosted 3, Minecraft songs, starting from 2013 and ending in 2017. The three Minecraft songs are by MinecraftJams. One is a parody and the other two are original songs. In total, there are eight different songs released on Mitch's YouTube channel, and those songs are:

On the anniversary of the Hunger Games parody, he uploaded the parody of Moondust by Jaymes Young. The song itself is named "Endstone", but the video title is "Remember Our Love".

There are also three other songs that Mitch hosted on his channel, "Bajan Canadian Song" a parody of Radioactive by Imagine Dragons, "Little Square Face" & "Diamond Sword". All Songs by MinecraftJams. All three videos were made by MinecraftJams, and were also put up on both Mitch's and MinecraftJams' channels. Thanks to inkbyteart for also assisting on some of the videos.

His final two Minecraft parodies were "War vs Herobrine" a parody of Black Beatles by Rae Sremmurd, and "Warzone" a parody of I Took a Pill in Ibiza by Mike Posner. They were published on June 25, 2017 and December 23, 2017.

Throughout the years that Mitch had made videos, the only series to have the most quotes ever come from is Hunger Games. During the years that Hunger Games (originals) were posted, interchangeably, Mitch and Jerome have used a lot of the quotes. (Nicknames, references, noises, etc.) 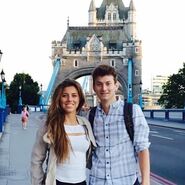 Mitch and his girlfriend Jessica (Jess) 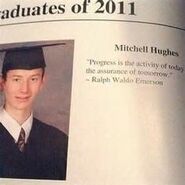 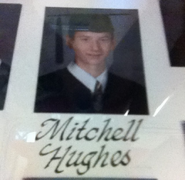 Mitch with Team Crafted in 2013 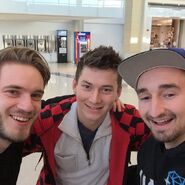 Mitch (center) and Jerome (right) running into PewDiePie (left) at an airport.
Community content is available under CC-BY-SA unless otherwise noted.
Advertisement