Barnaby J. Dixon (born: April 1, 1990 (1990-04-01) [age 30]), is an English puppeteer, animator, and musician. He is best known for his puppet performances, most notably an ongoing comedy/vlog series featuring his bird puppet Dabchick.

The same day, Dixon uploaded his first video, a stop-motion animated short titled Eskos that he had made back in 2009.

Dabchick offically debuted on April 4, 2015 in the first episode of his series, "Shell We Dance?". Dabchick would be a silent character until the fourth episode "The Seaside", where he was voiced by Dixon himself.

On Christmas Day 2015, Dixon unveiled his newest puppet, a velociraptor puppet that would later be featured in Dabchick's series.

On May 26, 2016, Dixon revealed his newest puppet concept, a tribal humanoid that would go on to be named "Manu" and would appear in several of its own videos performing dances, as well as making appearances in Dabchick's series.

On August 19, 2017, Dixon teased a new, glow-in-the-dark bug puppet styled in a similar fashion to Manu. On August 25, he revealed this new Bug in his most popular video. The Bug would also make appearances in the Dabchick series.

On October 12, 2017, Dixon revealed a new puppet concept with his face digitally projected onto a glow-in-the-dark humanoid puppet's head. This concept would later become a new character.

On July 9, 2018, Dixon revealed a new, glowing furry puppet designed as a mix between an aardvark, armadillo, and porcupine.

On September 20, 2018, Dixon met with Adam Savage for an interview on the latter's series Tested.

On October 15, 2018, Dixon revealed the completed concept of the digital face puppet: a "creepy face puppet" designed as a spiky, sinister-looking glow-in-the-dark humanoid. The puppet would be nicknamed "The Bogeyman" by fans after Dixon used it to perform a cover of "Oogie Boogie's Song" from The Nightmare Before Christmas on October 30 of that year.

On top of now doing live performances, Dixon continues to upload puppet demonstrations and performances, as well as episodes of Dabchick's series. In 2019, Dixon worked on the television series The Dark Crystal: Age of Resistance as a puppeteer for the puppet show sequence performed by characters SkekGra and UrGoh. 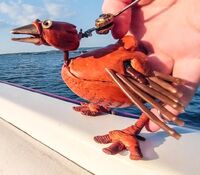 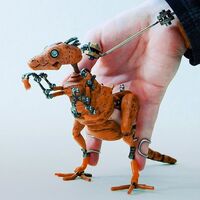 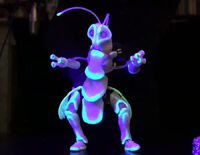 Creepy Face Puppet (Boogeyman)
Add a photo to this gallery

Retrieved from "https://youtube.fandom.com/wiki/Barnaby_Dixon?oldid=829713"
Community content is available under CC-BY-SA unless otherwise noted.