Shubham Saini was born in a village near Delhi[2], which, at present, comes under the Delhi NCT. He completed his school and college there. His father was a businessman and his mother was a housewife. He was raised alongside his younger sister Himanshi Saini. Going to a job every day, even during and after the lockdown imposed by the Government of India, his father developed symptoms like cough and fever. After a minor test, he was reported to be a patient of Typhoid. Although they followed the medicinal schedule for Typhoid, his symptoms only grew severe, until he was tested positive for COVID-19 after a few days. He was home-quarantined for a few days,[3] until he was tested negative for it the second time.[4]

Around the time when he had roughly 300 subscribers on YouTube, he realized he was not capable of the Bachelor of Technology stream at his college, and switched to pursue the Science stream. He had also done innumerable 6-month crash courses before his YouTube Career[5]. His parents and relatives lost faith in him, but he kept his trust in himself in his field.

Once he had enough subscribers on YouTube to sustain himself financially, he quit college and assisted in his father's business, maintaining YouTube as a part-time job. Later on, he chose YouTube as a full-time job, quitting the business occupation too. He states that his work has been entirely inspired by Swedish gaming YouTuber PewDiePie[6].

He got his first feature-phone when he was at twelfth standard, as well as his first TP-Link Wi-Fi router the very next year. He was extremely excited about it, as it was at this time that he became aware of what the internet actually was, and went on learning new skills and tools.

Finally, he found YouTube as a platform to express and share his views and talents with the world. So, he started uploading videos initially in the "roast" commentary genre. Unfortunately, he had to delete some of the first videos he made due to the immense amount of hate it brought him. He uploaded another high-quality roast video, but this time, it was removed due to a YouTube Copyright Strike because he used an anime he was not licensed to use. Thus, his channel began with a Copyright Strike.

He uploaded gaming videos next. His first video that was publicly available for the longest time was a "Friendship Day Special" video, which has since been unlisted from the channel. The first video to be publicly available to date is entitled "It's Just The Beginning :}". He did QNAs, vlogs, gaming, story-telling, and much more on his channel, many of which he still does to this day. At that time, he had a notion that applying swears on videos brings one more view, which was the reason behind his use of extreme vulgarity in his first videos. He made those videos private after he realized they were too vulgar. His first gaming video to remain publicly available is entitled, "CS:GO India Funny Moments #1".

He created a face-reveal video for the first time on 17 November 2016, which received much criticism due to the VGA camera quality. Among the viewers, it was a running gag that Shub would always be postponing his face-reveal saying "I need a new camera". He reached 1000 subscribers after a year and a half of launching the channel. He suffered from a lip infection at the time. He still posted a video stating how happy he was.

After a lot of tolerance and hard work, he reached 100,000 subscribers in June 2017, receiving his Silver Play Button a bit too late. After that, once his budget increased, he started playing paid games (although he continues to play free-to-play games). He also made a disstrack on "those who made diss-tracks".

He reached one million subscribers at the beginning of 2019. He uploaded an unboxing video for the Golden Play Button too, which was soon deleted for unknown reasons.

He attended a 1v1 interview organized by 1Up Gaming in October 2019. He also attended the 1st YouTube Gaming Creators Summit at Los Angeles, California, United States, in November 2019. Again later the month, he attended and served as a delegate at the Pop-Up Chennai, a YouTube Gaming Creators workshop held in Chennai, Tamil Nadu (India). He created two of his own games named "BeastBoyShub Zombie Shooter" in which he set the highest score ever, and "BeastBoyShub Zombie Hunter". The games were played by gamers across continents. As of 2020, he has started live-streaming games like Fall Guys and Ghosts of Tsushima.

After uploading a video on May 17, 2021, Shub went on the 9 month-long hiatus, during which he uploaded a vlog on Shubhuuu. The first video on his main channel after the hiatus was uploaded on February 22, 2022 where he described his experience off YouTube through the past nine months.[7]

Counter Strike: Global Offensive (or abbreviated to CS:GO) is the first game played by Shub and still publicly available on the channel. Most of them, though were played by him, were meant to represent how "Indians play CS:GO and use illegal means to win". The titles revolved around the base "Indian on CS:GO" and the thumbnails had the Indian flag represented by memes. It is the most vulgar series on the channel, with one of the videos being privatized due to strong languages and profanity. Other videos include heavy swearing and sexually explicit images occasionally shown on memes, which includes "indirect" vulgarity. Thus, it is not too popular among his viewers. The series was stopped in December 2018, and the last video of it was the Battle Royale mode.

Shub had started playing PUBG early when his channel was new. He used too much offensive language, which started bringing him some hate. Thinking that his viewers did not like his PUBG Gameplay, he quit it completely (though he played it sometimes). But after 2019, he continued playing PUBG since he realized that his viewers brought hate only due to his negative swearing. His PUBG username was previously BeastBoyShub_YT and now, it is TheRealShub.

The first episode of the Minecraft series was uploaded on July 12, 2019. The world created by Shub in the episode was named "We Will Rise Again....." after he spoke some negative sentences. However, the world was deleted in the second episode due to too many holes created by creeper explosions. The new world in episode two was deleted in the third episode for the same reason. However, the world created in the third episode continued all the way up to episode 11, after which, Shub's Windows OS in his PC crashed, deleting his world.

Shub decided to continue the series and created a new world in episode 12 named "We Will Rise Again......", which relates to Shub's situation, then. This world continued till the last episode of the series, episode 35, in which, he stated that "If this video gets 100K likes, I will continue the series - be it in Hard or Hardcore mode". The goal was on its way to accomplishment, when suddenly in mid-May 2020, he announced that the goal has been halved to 50K, whose milestone marked the beginning of Season 2, in which he continues his Minecraft life, eventually planning to switch to the hard mode. He revealed his world seed once he ended the first series, the seed being 7409573513383032728

Season 2 of the series was started in 2020 which was mainly centered around the Nether Update, with Shub taking challenges like 'returning home alive from nether'.

Later the following year, he created his second game, BeastBoyShub: The Zombie Hunter. It was also a worldwide leaderboard-based game. It was first released on Google Play Store in partnership with Diego Schirò.

RealShub was started in late 2019 after he realized he needed to learn English seriously.[8] He has said that he would seem more relevant if he had made a vlog in his local language, but nobody in his area speaks English, so he created his own English channel so that he can speak English and learn it all to himself. He thus started making vlogs in English. Though, when he speaks with his family members or some other person randomly, he is bound to speak Hindi or Haryanvi, but he still uses English subtitles in such situations.[9]

Shubhuuu was started in January 2020 with the original name "Shubhooo", since he was done vlogging in English and wanted to try out Hindi vlogging too. But the most rapid growth ever since his catchphrase "#Beast-Army" had begun was got by "Shubhooo". It gained 100,000 subscribers in four days. Though both his vlogging channels have above 100,000 subscribers, it is unconfirmed if he has received the Play Buttons for both the channels. However, he confirmed in his YouTube winter gift unboxing video that he has not placed his order for his Silver Play Button for RealShub yet.[10] Over time, this channel has got more active than RealShub, and along with that, surpassed the former one faster, since his viewers got themselves adapted to Hindi videos more than the English ones. In November 2020, the channel was renamed to "Shubhuuu".

Besides these channels, he also has a Google account with his real name but it does not have a YouTube channel. 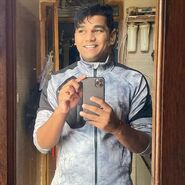 Shubham with other creators at Chennai