BillionSurpriseToys - Nursery Rhymes, or simply BillionSurpriseToys (also known as BST Kids), is an Indian kids educational YouTube channel based in kochi kerala, india. It is run by We Bros Media Private Limited, who are known for their popular nursery rhymes and kids' edutainment songs. Billion Surprise Toys is recognized as one of the topmost children entertainment learning brands. They are dedicated to helping children in learning and acquiring their dreams while having fun together.

They are most well known for their "Johny Johny Yes Papa" video featuring a singing CGI fridge, which went viral before its deletion in early September 2018 due to heavy criticism. The company has since been a working improvement by the production team.

On May 27, 2018, Billion Surprise Toys (BST) released "Darling Darling Song and Many More Videos", which has received over 568 Million views as of August 2019, making it the most viewed non-nursery rhyme video on the channel.

The company also maintains 10+ additional YouTube channels of different languages under the BST title. Billion Surprise Toys is run by roughly 51-200 members of the We Bros Media staff.

BillionSupriseToys is the 98th most subscribed channel on YouTube, with over 25.6 million subscribers.

Billion Surprise Toys is most known on YouTube through their viral Johny Johny Yes Papa videos. There have been many variants to the "Johny Johny Yes Papa" song on their channel, such as one combining the tune to the famous "Baby Shark Song" with "Johny Johny" lyrics, paired with popular dance moves performed by the father and son, such as the "horse dance" from PSY's “Gangnam Style” along with other familiar moves. A clip of this first rose fairly quickly on Twitter by the user @b6ner with the caption "i’m losing my f--king mind" before the company issued a DMCA takedown. The original for the most part has been wiped from the internet, though some distorted re-uploads of the song can be found on YouTube, along with some cleaner re-uploads on Reddit. Other variants of the song that have also gained attention online include a version with a talking fridge, and an original "ice cream" song featuring a talking ice cream cone, among other characters.{{YouTuber1

Most of their videos have gotten popular by what many users presume to follow the typical YouTube kids video playbook of producing a new, slightly altered version of an existing and already popular nursery rhyme video in an effort to manipulate YouTube’s algorithm. Their username for instance, "BillionSurpriseToys" seems to be an attempt to grab attention from the popular toy unboxing/surprise egg videos.

Since the viral phenomenon, Billion Surprise Toys had disabled outside embeds and started issuing Digital Millennium Copyright Act (DMCA) takedown notices to parody videos on YouTube, Twitter, and Instagram. − This move has been considered controversial by many as BillionSurpriseToys owns the copyright to neither of the two songs it combined, since “Johny Johny Yes Papa” has existed years before Billion Surprise Toys, and the “Baby Shark Song” being created by Korean kids entertainment company Pinkfong

Since September 2018, the creators have been working on re-modeling most of the character model possibly due to all the complaints of how "hideous" the characters are, or as an attempt to rebrand themselves away from all the memes, with Papa being the first one to go through this change. The voice actor to Papa has also not been apparent in their recent songs or dubs, instead of being present as "doctor" and other figures. This was changed back soon thereafter, after much criticism from other popular YouTubers. Many have joked that Mama has in fact gotten a divorce and replaced Papa with the "hotter" version of himself, such as YouTuber Danny Gonzalez, referring to him as "Chad", a name people online often use when referring to men with a good physique that women often opt for.

Johny, Dolly, and Chiya have also gone through these revisions as of recently as more rounded, cuter versions of themselves. Chiya, for instance, is no longer cross-eyed, and Johny has his hair styled up in a mohawk-like fashion.

However, as of 2020, the channel appears to be returning to its old designs, with many thumbnails featuring them as well as new cartoons using them. Papa has gone back to his old design somewhat, with the only difference being the absence of his mustache.

As of late 2020, the characters went through another revision in design. The mom, Chiya, and Dolly now have more refined and cleaned up designs, while Johny's hair has been changed once again. A new character, called "Baby" has also been introduced.

Papa and Chiya have now become much less prominent in the newest videos released in 2021, usually only appearing in compilations of old videos. 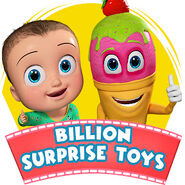