He is from Roxboro, North Carolina and has attended Roxboro Community School. He has been playing drums for the past 8 years, but has been playing seriously since 6 years ago. He used to play for his band, Flowwire (it is unknown if he is still playing with them) and was the drummer for Grammy-nominated singer Jamie Grace. According to this video, he possibly won't be making any covers since he will be touring with them. He will post videos of live performances, however. He currently resides in Atlanta, Georgia.

On April 16, 2014, he announced that he is now an official D'Addario and Co. artist. As of May 2014, he no longer tours with Jamie Grace due to unknown reasons. Currently, he is the fill-in drummer for the Nashville-based rock band, We As Human.

Cymbals: The only ones that he is known to be using in 2013 are a pair of 13" Sabian AAX Studio Hi-Hats and a Zildjian 20" A Custom China.

Snare heads (all are 14" in diameter)

While touring with Jamie Grace in 2014. 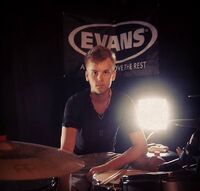 Holt during his earlier days in YouTube.
Add a photo to this gallery

Retrieved from "https://youtube.fandom.com/wiki/Brooks_Holt?oldid=828132"
Community content is available under CC-BY-SA unless otherwise noted.