Casey Aaron Cooper (born: September 27, 1991 (1991-09-27) [age 28]), better known online as COOP3RDRUMM3R, is an American drummer best known for his drum covers, original songs and drum lessons to the YouTube community. He is currently the most subscribed drummer on YouTube. With an average of over 2 million subscribers and 390 million video views. He is currently the most subscribed and most viewed drummer on YouTube as of January, 2015.

Born in Arlington, Texas, Cooper first picked up sticks at the age of 6 and got his first drum kit (a Pearl Forum) at 8. He spent his first 12 years in Texas and attended South Paulding High School prior to attending university. Although he has been on YouTube since 2008, he only started actively making covers in May 2011. He currently resides in Atlanta, Georgia, where he was studying music technology at Georgia State University (GSU) where he also played and continues to play for their Marching, Rock, and Basketball bands.

He was in an on-and-off relationship with Erica Schiller, a full-time music student from GSU; however, on August 20, 2014, he replied to a commenter asking on his relationship status that he was currently single at the time. However, in March 2015, he announced on a YouTube video that he was now in a relationship with Hannah Condrey since March 16, 2015. On September 29, 2015, he announced that he and Hannah had became engaged. They have since married and have a son named Cadence Westin Cooper and daughter named Carolina James Cooper.

He is currently building a Music Studio in his home basement named 'COOP3R STUDIOS'.

He mostly does videos of drum covers, although he does post lessons on drumming, original songs, and live performances. He also helps beginning YouTube drummers on how to make good drumming videos. He shot to fame when his cover of Skrillex's "Scary Monsters and Nice Sprites" was voted top on the featured page at Reddit and gained 1,000,000 views in 48 hours.

Casey is endorsed by Pearl Drums, Zildjian Cymbals and Vic Firth. He has his own signature sticks by Vic Firth and Snare Drum from Pearl called the Igniter Snare.

He has a gaming channel and also another channel where he uploads non-drumming videos and Q&As. Currently, both of these channels are inactive. 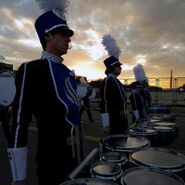 While practicing with the GSU Rock Band. 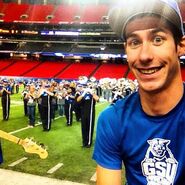 Cooper (center, on drumset) in November 2014 during the Macy's Thanksgiving Parade.
Add a photo to this gallery

Retrieved from "https://youtube.fandom.com/wiki/COOP3RDRUMM3R?oldid=724035"
Community content is available under CC-BY-SA unless otherwise noted.