Jim Caddick (born: June 19, 1994 (1994-06-19) [age 26]), better known online as Caddicarus (or Caddy), is an English YouTuber who does video game reviews usually on the PlayStation system, video game retrospectives, and many other types of videos revolving around video games. His videos usually combing vlogging with showing clips of the game or game series he's talking about. James has been one of the six Hidden Block members since March 2013, when the site was created.

He is the older brother of Professor Juice.

On February 10, 2016, Caddy announced that he will rebrand his series to gain more control to his upload schedule, cancelling Caddy's Retrospectives, Tinker Time and Drive-Thru Reviews respectively.

The Caddicarus Show is the name of Caddicarus' main show that's uploaded on Sundays in which he reviews games/movies/tv shows and makes Top 10/20 lists. His first episode was him reviewing a PS1 game called Rascal Racers. Jim has also collaborated with various other YouTubers, for example brutalmoose, Yungtown, The Completionist and SomecallmeJohnny.

The 'Caddy' Show is essentially just a bite-size version of the main 'Caddicarus' show uploaded on Wednesdays. In the show he covers various topics ranging from traditional reviews with a score, simple 'thoughts on' videos, drum covers of video game music and other gaming topics like 'The Hype Train' and similar.

The show is edited by Caddy's girlfriend Cerys and is essentially the same as the show's predecessor 'Caddy's Film Fridays' where he and Cerys (and sometimes her kids) talk about a movie that they just saw or re-watched, just uploaded with no set schedule.

The special was done for December 2016 and it had Caddy counting down his 25 favorite games of all time, with a video coming out every day in December until Christmas Day.

The special was done for December 2018 and it had Caddy counting down his 25 worst games of all time, with a video coming out every day in December until Christmas Day. Originally scheduled to be released in December 2017, but it wasn't produced as Caddy has said on Tumblr he couldn't do it due to not having much time.[1].

The show was structured like a modern game review show but more in depth with him talking about each part of the game individually (story, gameplay etc.). The show only lasted for a single episode (which was on Resident Evil 6). It was replaced with 'Current Quickies'.

In Caddy's Retrospectives Jim reviews numerous games in a singular franchise over the span of a few weeks. Among the franchises he has reviewed are Gex, Sly Cooper, Max Payne, Uncharted, and Crash Bandicoot. He stopped making this show in early 2016, along with 'Drive Thru Reviews', 'Tinker Time' and 'Today's Special'.

Drive Thru Review is a fast paced, short review on a newly released game. They were initially only released on his second channel, although they were moved to his current channel. The show was discontinued in early 2016, along with 'Retrospectives', 'Today's Special' and 'Tinker Time'

Current Quickies is a similar concept to the Drive Thru Review, except Caddy talks very quickly throughout the video (and takes a deep breath between each point). The show also features the character 'Quick Jay Horsethroat' (which is just Caddy with a scarf and a 'Sex Pistols' T-Shirt on). He has stopped making this show as of 2017 due to it becoming too formulaic to him, and it was replaced with the 'Caddy' show.

In this series, Jim (and sometimes Cerys his girlfriend) either gives his thoughts on recently released movies or asks his girlfriend's daughters questions regarding a certain topic relating to films or media in one way or another. While this show has been discontinued, it was replaced with 'CINEMAGGOTS' which contains the same formula as Film Fridays but is released with no schedule. 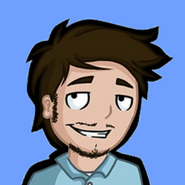 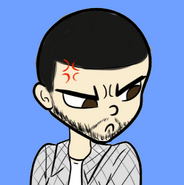 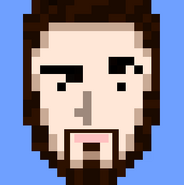 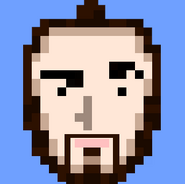 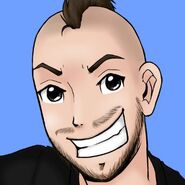 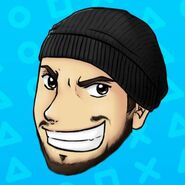 Caddi's current PFP
Add a photo to this gallery

Retrieved from "https://youtube.fandom.com/wiki/Caddicarus?oldid=851042"
Community content is available under CC-BY-SA unless otherwise noted.