Caroline "Cara"[1] (born: September 18, 1998 (1998-09-18) [age 23]), better known online as Captain Puffy (or simply Puffy, formerly UniClad), is an American gaming YouTuber and Twitch streamer known for her Among Us and Minecraft gaming content, she is also a former Origins Member. 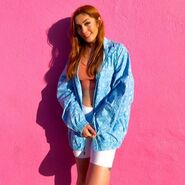