The Amazing Marble Race by carykh has 3 seasons.

The first season was uploaded on December 21, 2011. This marble race has two parts with 15 marbles. The winner is Orange, which won in 20.7 seconds. In second place is Black, which won in 55.1 seconds. The third place is Yellow, with 1 minute and 27 seconds.

The second season was uploaded on February 23, 2013. It is shorter than the first season because it only has 1 part and 8 marbles. This time, Blue is the winner, Yellow (who placed third in first season) is in second, and Brown came in third place.

The third season began on March 31, 2015, where each leg is uploaded in different videos. It has a total of 56 marbles. 10 marbles were eliminated in the first leg, 9 marbles on the second leg, and so on. It has currently reached Leg 8. This season is not finished yet.

BFDI Mini-Season - "Marbles" is a "spin-off" of the usual Marble Race style, but the marbles are based on the appearance of the assets of the original 21 BFDI contestants.

B.A.G.U.E.T.T.E. (Battle Among Gelatins Using Expertise To Take Everything) is the first official BFDI/BFDIA Camp. The camp was announced on September 1, 2012, when it was announced that BFDIA was going to be monthly again. After a 3-year hiatus, it was officially cancelled in favor of TWOW.

Ten Words of Wisdom (TWOW) is a camp started on December 12, 2015, by Cary Huang. As BAGUETTE is confirmed to be canceled, this show is now its successor.

Rules: Contestants are given a writing prompt, which they must answer or conform to using exactly 10 words (or less). Unlike BAGUETTE, the time limit is very strict (as the competitors MUST answer in time), and the contestants in this camp are now Books instead of Gelatins.

The channel gained a shoutout at the end of "BFDI's Road to Half a Billion Views" by Tennis Ball (voice acted by Cary Huang).

Humany is a YouTube channel made by Cary Huang for his "lower quality” videos, such as rants and non-animated videos, that were previously seen on Carykh prior to this channel's creation. The name "Humany" is a reference to the common theme among BFDI characters where a "y" is placed at the end of an object's name.

The channel has a series that consists of him reacting to episodes of BFB, recording his lines for BFB episodes, showcasing plushies, and content that is unrelated to BFDI.

lazykh is a YouTube channel created by Cary Huang. The creation of the channel was announced on Cary's main channel, carykh, where Cary said that this channel is about his stories or what he thinks about an event. His goal is to be "as lazy as he can" so he can save time making videos and uploading those to YouTube “without any intervention” Cary also stated that "I will try not to use any editing software, like Vegas Pro, or Final Cut Pro”.

lazykh was first mentioned on a carykh's video, called I lost $20,000 because We are Number One as "secret channel that starts with L". 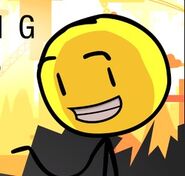