Chad Bergström (born: December 5, 1988 (1988-12-05) [age 31]), better known online as Chadtronic, is an American YouTuber and commentator known for his reaction and toy videos. His channel is mostly filled with Nintendo-based content, but it sometimes strays off into different categories.

Chad also has two other channels as well: Chadtronic Pokémon, where he does various unboxings of Pokémon merchandise, and Gloop, a Nickelodeon-themed channel.

In 2018, he started his own multimedia company called Yojoyco.

Chadtronic can either be very hyper or calm. In his earlier videos, he is very calm and doesn't overreact. In his reaction videos, however, he is very hyper and strange (in a good way) because he often screams, laughs, coughs, falls out of his chair, slams his NES pillow on the ground, etc. As Chad has stated in a Sonic Boom livestream, the NES pillow rage was only a way to express his anger. It stuck with his fans and now whenever he rages he smashes his pillow. 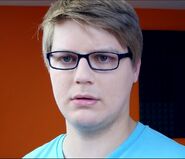 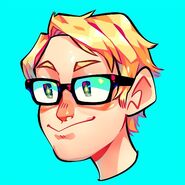 Chadtronic's portrait for PeanutButterGamer's Hardcore series.
Add a photo to this gallery
Retrieved from "https://youtube.fandom.com/wiki/Chadtronic?oldid=862868"
Community content is available under CC-BY-SA unless otherwise noted.