Chipflake is an English animation YouTuber who currently resides in Düsseldorf, Germany, whose videos are similar in format to TheOdd1sOut or Jaiden Animations.

Chip's character is a white cat with a brown left ear, brown tail, brown arms and a red neckerchief. The neckerchief was changed briefly to the rainbow flag for Pride Month of June 2017 & June 2018, and in June 2019, it was changed to the Non-Binary pride flag rather than the Rainbow flag. Chip has been through 16 art styles, through the span of January 30, 2017 to January 31, 2019. They currently have a very detailed character including an item including a bandana. 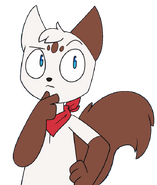 "style 8 chipflake"
Add a photo to this gallery
Retrieved from "https://youtube.fandom.com/wiki/Chipflake?oldid=845545"
Community content is available under CC-BY-SA unless otherwise noted.