Wikitubia
Register
Don't have an account?
Sign In
Advertisement
in: YouTubers, Users who joined in 2011, Male YouTubers,
and 9 more

Kenneth Charles "Ken" Morrison (born: September 21, 1985 (1985-09-21) [age 36]), better known online as CinnamonToastKen, is an American Let's Player who started uploading videos to YouTube in 2011. He moved to California in 2014, then moved back to his home town in Mississippi in 2015 with his wife, Mary SuperMaryFace, along with their corgi, Betty, their Newfoundland, Boss, and their newest dog, Biscuit, who breed is currently unknown. They have multiple Ball Pythons, the most famous one being Ben.

Ken and Mary are now parents to Layla Ren (born May 4, 2017 (2017-05-04) [age 5]), and Raphael Baby R/Raph for short. Ken commented that they had planned to name all of their children after the Teenage Mutant Ninja Turtles, however as Layla was born a girl they opted not to name her Leo as they had planned for a son.

Ken usually uploads videos once or twice a day, and commonly has a cutout facecam of himself in the corner of his videos. One of his most notable features is his iconic bear hat.

Relationships With Other YouTubers

Ken has played with various YouTubers such as Cryaotic, PewDiePie, SeaNanners, Jacksepticeye, and Markiplier. He is married to fellow YouTuber, Mary SuperMaryFace, and has been since October 1, 2013. Together, they share a YouTube channel named Ken and Mary. His brother, Kevin, also has his own YouTube channel called Public Nintendo Collector.

In 2014, Ken did a podcast series with PewDiePie, referred to as the BroKen Podcast. It was mainly a whole hour or more of them talking about random topics. The podcast also featured a host of special guests that joined them, such as Cryaotic Podcast #3, TheRPGMinx Podcast #5, Yogcast Strippin Podcast #6, Markiplier Podcast #7, Jacksepticeye Podcast #8, and Yogcast Martin Podcast #9.

CinnamonToastKen plays a wide variety of games and visual novels, most of which are short flash game compilations and co-op games with other YouTubers such as Prop Hunt and GTA 5.

Despite his refusal to swear, CinnamonToastKen has chosen to play games that have other questionable elements. He also does not consider words to describe a person's life as swearing, but he does say them from time to time. Ken recently posted a video detailing his new resolve to be more himself and stop filtering it before it comes out. He also said that he will say a few swear words occasionally.

Some of CinnamonToastKen's popular let's play videos have adapted to animations by ScribbleNetty. Some of these include his Prop Hunt games with Cryaotic and PewDiePie, along with many of his Surgeon Simulator videos. 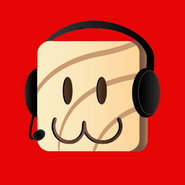