Cody Leach is an American YouTube reviewer who mostly focuses on science fiction and horror movies, though he is also known to branch out to other genres from time to time such as video games and music.

During his videos he often speaks to the audience with a green screen background displaying movie posters. He has his own rating system where at the end he tells the audience to either skip or buy the movie. His videos also begin with a hard rock soundtrack and sometimes feature a mini comedy skit at the beginning.

Cody will sometimes go on a livestream known as the Scream Stream, where he talks to his fans and other fellow movie reviewer YouTubers in the stream. The members usually present in the stream include: DrumDums, Dave McRae, WeWatchedAMovie, WillILikeItReviews, and Mother Mayhem. 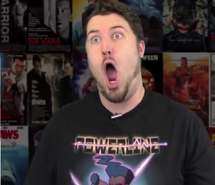 Add a photo to this gallery
Retrieved from "https://youtube.fandom.com/wiki/Cody_Leach?oldid=833234"
Community content is available under CC-BY-SA unless otherwise noted.