Combat Wombat is an American YouTuber that makes commentaries on controversial YouTube channels like ImJayStation or NoughtPointFourLIVE. He normally puts comedy into his videos, and notes that he doesn't hate the YouTubers he makes videos on, he only does it to poke fun at some of their flaws.

Combat Wombat created his channel on March 28, 2017, originally calling it Clicked Tazer. At first, he made comedy videos of him playing and making fun of video games. However, he started making commentary videos on GTA YouTubers, and YouTube in general.

On December 18, 2017, Wombat uploaded the video, Everything Wrong With NoughtPointFourLive | A Story of Clickbait. The video is one of his most popular and is one of, if not the, most notable video on his channel.

A few months later on May 28, 2018, Wombat uploaded a video called "All Good Things End - New Channel and Commentary Channel", where he announced he would create a second channel named Clicked Tazer, and would be putting his comedy video game videos on there, renaming this channel Combat Wombat.

After this change, Wombat began uploading commentaries on Combat Wombat, and comedy videos on Clicked Tazer, like he said. All was going good until on August 22, 2018, Wombat uploaded the video "Why I'm ANGRY With YouTube", explaining that YouTube permanently demonetized his channel for apparently "watching his own ads", which he denied and showed proof that he didn't. In response, his fans began supporting him on Patreon enough for him to do YouTube full-time.

In 2018 and especially 2019, Wombat has faced many small and petty feuds and controversies with YouTubers, many of who he has made videos on. In July 2019, YouTube announced that any videos that seemed to be bullying or harassing other channels will not be allowed. Even though his videos are not harassing anyone, Wombat knew that YouTube would see his channel that way. Because of this, he uploaded a video on July 16, 2019, saying that he will only be making commentaries on video games and video game controversies. Many of his fans were supporting of him. However, a few months later, Combat stated that he'll go back to making YouTuber commentaries, while also making gaming commentaries. 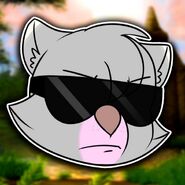 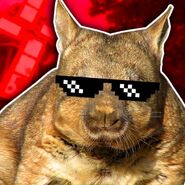 Add a photo to this gallery
Retrieved from "https://youtube.fandom.com/wiki/Combat_Wombat?oldid=1107483"
Community content is available under CC-BY-SA unless otherwise noted.