CrazedCake (born: November 16) is an Irish YouTuber known for their animation memes about Roblox Piggy, as well as their own characters in their series Crazed Heist. They collaborate with other animators in the community. They are also widely known for appearing on the Turkish news in 2020.

They were formerly known as Creative Bunny 45 until 2017. In October 2020, they released a video "ROBLOX PIGGY is on the NEWS". Turkish news channel ATV used their animations in a news report without prior consent, and cropped CrazedCake's YouTube watermark out of the report.

In 2016, CrazedCake became best friends with the animator Shgurr and they made multiple collaborations together. Many speculate the two artists are involved romantically, with their fans shipping them with one another. People also believe they are roommates.

CrazedCake is currently working on a series called Crazed Heist. 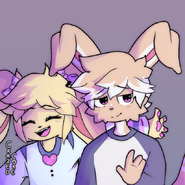 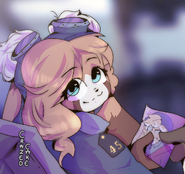 Violet
Add a photo to this gallery
Retrieved from "https://youtube.fandom.com/wiki/CrazedCake?oldid=1107082"
Community content is available under CC-BY-SA unless otherwise noted.