Creator Awards (more commonly known as Play Buttons) act as a reward for content creators hitting a chosen number of subscribers as being recognized by YouTube. These are distinct from the YouTube Awards, which were intended to recognize the best quality videos.

The Play Buttons are based on a channel's subscriber count, but are awarded at the sole discretion of YouTube – each channel is reviewed before an award is issued, to ensure the channel follows YouTube's community guidelines.

When a verified YouTuber reaches a specific milestone and is deemed eligible for a YouTube Creator Reward, they are awarded a relatively flat trophy in a metal casing with glass panelling and a YouTube play button symbol, as well as featuring the creator channel name's embossed on it, Its kinda like a "Thank You" Reward. The trophies are of different sizes: each button and plaque gets progressively bigger the more subscribers the channel gets.

At the moment there are five different Play Button tiers that you can get:

Recently, YouTube has introduced 2 new awards that are available for purchase on the Society Awards website after a creator has surpassed either 100,000 or 1 million subscribers. These 2 new awards consist of a sheet of metal, either silver or gold in colour, that have either the text of the 100,000 or 1 million subscriber letter stamped on them, put on a piece of acrylic plastic. 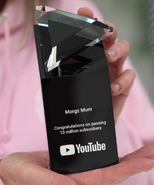 The old design of the Diamond Team Award from Morgz Mum 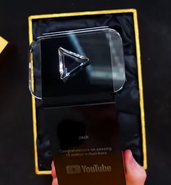 The new design of the Diamond Team Award from JackSucksAtLife

The Icon Awards were a type of award which was cancelled. It came with two types, Silver and Gold, most likely made of wood. The gold cost $425, and the silver cost $225.

The Diamond Plaque was also a cancelled award, which is a 17" plaque that is the same size as the Golden Play Button. The only difference is that it's white and the triangle is replaced with the diamond from the Diamond Play Button.

At VidCon 2012's Industry Day event, YouTube executive Tim Shey introduced the Gold Play Button were to be awarded to creators who have had their channels surpass one million subscribers. At the time of the announcement, 78 channels qualified for the award. Also, Shey announced that channels with over 100,000 subscribers would receive a $500 gift card and a DSLR camera case. Channels with over 100,000 subscribers would later be eligible to receive a Silver Play Button.

Three years later, at VidCon 2015, Matthew Glotzbach, YouTube's Vice President of Product Management announced the introduction of the Diamond Play Button. At the time of this award introduction, 35 channels qualified for it.

On December 19th, 2016, PewDiePie received the first-ever Custom (Ruby) Play Button along with several mini-awards. It is in the shape of PewDiePie's brofist channel logo and is a translucent red.

YouTube redesigned its play buttons as of March 1, 2017, as well as their build. This includes the Silver and Gold play buttons, with a much sleeker look. The old version of the Silver Play Button, for instance, was made of a nickel-plated cupronickel alloy and featured a glass panel with a metal framework.

At the moment, it is unsure whether the Custom play button will be redesigned completely to fit the creator's logo, as seen in Felix's, or feature a similar triangular base with crystal engraving like T-Series' from that point on.

Often users like to get a bit crafty with their Play Buttons, either to match their brand or to simply forge something for viewership. These variations are fake and unrecognized by YouTube. An example of this is can be Kwebbelkop's Orange Play Button. Other YouTubers who have made custom play buttons include:

Currently, TheSoul Publishing, the company behind channels including 5-Minute Crafts and BRIGHT SIDE, has the most Creator Awards as a brand with 10 diamond play buttons and 66 gold play buttons.[1]

As an Individual, JackSucksAtLife has the most, with at least twelve creator awards from YouTube, as well as two fake awards he bought from eBay and Etsy, an award from Wikitubia for being the 34th member of the Wikitubia Hall of Fame that was prompted by Wikitubia's Twitter account getting 3000 followers, a self-made "profile picture" award that he has since sold on eBay for ₤50, a hydro-dipped Gold Play Button he received from Ryguyrocky, and the chest that PewDiePie's 100 Million Subscriber award came in. Jack also found an exploit where you buy YouTube play buttons and he managed to get a diamond play button although he only has 1.3 million subscribers as of August 1, 2020. His official YouTube awards include his original silver award he received in 2014 when his channel was called JackSucksAtMinecraft, updated silver awards for his channels JackSucksAtLife, JackSucksAtStuff, Jack Massey Welsh, JackSucksAtGeography, turd boi420, and his old channel SamSmellsOfApricots, a gold award for JackSucksAtLife, a gold award that Skeppy bought for Jack that has Skeppy's name on it, a diamond award that has KSI's name on it, as well as a Gold and Silver letter, which are relatively new additions to the YouTube Creator Award library. Additionally, Jack's newest channels JackSucksAtPopUpPirate and JacksEpicYoutubeChannelFullOfFunTimesAndFunHiRickX currently have received Silver creator awards.

YouTube Originally gave out either a Director's Chair or a Camera Bag for when a channel had reached the 100,000 subscriber milestone, each reward was also accompanied by a $50 YouTube Giftcard. Each item were printed with the most popular classic YouTube videos in a sort of compilation print. CrazyRussianHacker was one of the persons who received the camera bag, he has made a video showing it off.[2] Prior to 2020 there was only one video showcasing the Director's Chair. This video was published by the YouTuber WikiGameGuides and the video was part of his "Mailbag Monday", the date being August 12th, 2013.[3]

On November 10 2020, JackSucksAtLife posted a video stating he found the rarest YouTube Creator Award ever. He purchased the Directors Chair from YouTuber Tama Hero as she was sent two Director's Chairs and one Camera Bag. The chair alone cost Jack $200 USD, which equates to £150 Great British Pounds and costed £50 to import from the USA.[4] The Director's Chair was still in the box, while the whereabouts of Tama's other Director's Chair are unknown. While the Director's Chair is not a YouTube Play Button, it is a very rare and odd YouTube milestone award for reaching 100,000 Subscribers.

There is also the profile pic award this was giving to some YouTubers in 2014 with over 5 million subs like DanTDM. They all had the YouTuber profile pic in the middle in black and white. And a bunch of positive YouTube comments in the background. JackSucksAtLife made his own one but using negative comments instead. He later sold this on eBay.

Retrieved from "https://youtube.fandom.com/wiki/Creator_Awards?oldid=1123820"
Community content is available under CC-BY-SA unless otherwise noted.