Scott Major (born: November 10, 1995 (1995-11-10) [age 26]), better known online as Dangthatsalongname, Scott Smajor, Smajor1995, or just Smajor, is a Scottish YouTuber and Twitch streamer who currently resides in South East England. He publishes gaming videos on his channel. He created his YouTube channel in July 2013 with his first video, titled "Trending Apps!" coming only two days after launching the channel.

Scott Major was born on November 10, 1995 and grew up with his sister. He came out as gay in a video in March 2018. He is 6 feet (183 centimeters) tall and has adopted a small kitten. He has two dogs that live with his parents. He is known for his sassy personality. He lives with Jack Manifold in Brighton.[1]

X Life is a modified SMP — created by Dangthatsalongname — where players start with one heart and the objective of the server is to survive with 10 lives. Losing a life adds one more heart to a player's health, and a player is eliminated from the server if they lose all of their remaining lives. He was one of the members of the "Witch Coven" that formed on the server.

The Empires SMP is a modified Minecraft server, where the objective is for players to establish their own empires to trade goods and resources with other empires, as well as wage wars. He founded the Rivendell Empire which was elven-themed and located in the high snowy mountains.

Season 2 is very similar to the original season, but with new Empires and set in version 1.19. This time he founded his rainbow-themed empire he calls "Chromia" in a hilltop meadow. He played as an eccentric collector and is in charge of dye export.

Double Life is the third season of the "3rd Life" Hardcore SMP by Grian where each player has three lives, and becomes hostile on their last "red" life. The world is enclosed within a border, and there is only 1 enchanting table, which in this season was located in an Ancient City. The twist for this season was that each of the 14 players was randomly assigned a "soulmate" who they would share a health bar with. Scott's soulmate was PearlescentMoon.

Scott is the event coordinator and team organiser for the tournament. Becuase of this, he has participated in every event. 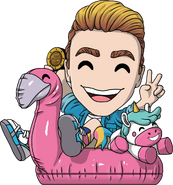