Enoc Daniel Rodriguez, better known online as DaniSenpai017, is a Mexican actor, writer, composer, and Dominican content creator, who made his first debut as a main character and writer in The Pursuit Of Love (2017), and as main villain in 60 seconds (Dominican version drama) (2017).

In 2014, he decided to create a channel on YouTube based on game plays, later on focus only on videos related to anime (such as theories, reviews[1] , premieres[2]), in December[3] [4] he participated as editor in a magazine called Soul Central Magazine located in london and then in several editions released in 2015[5].[6]

In 2016, Daniel was part of a network called BroadBandTv located in Canada, as a member of the network (with its channel[8]) and as a talent representative of the network for 12 months.

In the same year Daniel made a video where he revealed some theories and curiosities of an anime called Sousei No Onmyouji (Twin Star Exorcists), which caused several pages, forums, groups to share and talk about this topic, thus positioning his video in less than 48 hours as the more viral video about that anime.[9] [10]

In 2017, he made an international tournament with his friend Kirinow based on the card game Yugi-Oh-Duel Links, was composed of 16 duelists in an elimination round (with 4 phases) this tournament called "Copa Yugi World Championship 2017"[11] was held between September and October of the same year.

In 2018, Daniel created a podcast section focused on giving his opinion of the anime episodes that are in broadcast according to the season that is present at that time (winter,spring,summer,fall) this section was name as DanimeShow[12], section available in Tunein, SoundCloud and Ivoox.

Daniel was born in Santiago de los Caballeros, the youngest son of Rosa Garcia (mother) and Antolin Rodriguez (father), he grew up in a large family composed of 6 brothers; Rolyn, Salomon, Paul, Roseline (only sister), Moroni and Samuel,

Shen he was young he play basketball, a sport in which he participated as a player in GO Sport Santiago for 6 years (2006 - 2011).

In 2011, he played his last games representing the Upward team as the player number 22, at the end of the tournament the upward team wins the match with a total of 31 points, this tournament was held in Leon Jimenez park.​​​​​​

Susan Wojcicki the ceo of YouTube, announced in December 2017 the new changes that would be regarding the YouTube Partner Program (YPP)[13], this affected thousands of small creators causing a discussion in the blog that she had published, after 48 hours they were forced to disable comments to avoid a deviation of the topic.

In that month, Daniel received 2 strikes from Kadowaka and Sonic Music Japan for some videos he had made talking about the season premieres, all that would have been the end of his channel, just having received one more strike his channel would have been permanently eliminated. 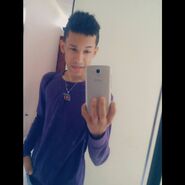 Subscribers with DaniSenpai017 in Minecraft, Server: SoulCraft
Add a photo to this gallery
Retrieved from "https://youtube.fandom.com/wiki/DaniSenpai017?oldid=652508"
Community content is available under CC-BY-SA unless otherwise noted.