Outsidexbox • Outside Xtra • Eurogamer• Asmodee Live; Shut Up & Sit Down

Dicebreaker is an English YouTube channel devoted to tabletop gaming hosted by Johnny Chiodini and Michael Whelan which is part of the Gamer Network.

Johnny Chiodini had spent over a decade as a video games journalist beginning in the industry in 2008,[1] most notably working for Eurogamer between early 2014 and June 2019 when he announced he was leaving the channel,[2] and is also well known for being the DM for Outsidexbox's Dungeons & Dragons videos.

Michael Whelan, also known as Wheels, began working at the Gamer Network in July 2019,[3] having previously worked in the video games industry, most recently as a community manager at Creative Assembly and a host for their livestreams as well as the Total War: Live channel.[4] [5]

The channel also received a leg-up prior to its official launch courtesy of Outside Xtra, who posted a video on August 20th 2019 hosted by Johnny discussing how D&D players can derail their DM's plans, citing examples that have happened throughout the Oxventures, with Johnny promoting the channel in the video's outro,[6] with the first videos being posted to Dicebreaker's channel on August 21st 2019.[7]

Why you should play...

In order to balance the aims of being both a YouTube channel and a website the Dicebreaker team began to grow in early October 2019, with the new members of the team beginning to appear in the channel's videos and livestreams to introduce them to the audience. So far the expanded team consists of:

In January 2020 the first episode of The Break Quest Club, a Dungeons & Dragons campaign featuring members of the Dicebreaker and Eurogamer teams, was posted on Eurogamer's channel,[15] with Johnny once again assuming DM duties. In the first episode Johnny mentioned that the quest takes place in the kingdom of G'eth, the same location of the Oxventure, leading to a few comments wondering if there will ever be an Oxventure/Break Quest Club crossover

Played by Aoife Wilson, a human cleric accompanied by her dire-cat companion Pangur Bán (Bán for short) who are in service to the god Pelor...when Etain isn't setting fire to things

Played by Zoe Delahunty-Light, a tiefling war jester who likes to put on a show even when she happens to be running people through with her rapier

Played by Michael Whelan, a warforged artificer without jurisdiction who dispenses justice and, even though he has no nose, he can smell crime

Played by Alex Lolies, a Shadar-kai rogue from a well-off family in Shadowfell who attempts to portray herself as being far edgier than she actually is

Played by Ian Higdon, a half-orc barbarian who seems more interested in having a fry-up in his golden skillet than he is in things such as battle or questing

Literally Everybody Else in the World

Played by Johnny Chiodini, continuing his DM duties which he began with the Oxventure

In February 2020 Dicebreaker began their own DnD campaign, with the whole team playing a campaign using the Eberron: Rising from the Last War sourcebook,[16] with Johnny once again assuming Dungeon Master duties for a band which he describes as "a Gobbo, a cat-person, two megalomaniacs and a smack addict."

At the end of the third quest, the campaign ended on a cliffhanger with the majority of the party literally sent to hell, with the second season of Dungeonbreaker set to take place in the Descent Into Avernus sourcebook.[17]

Mist on the Mountain

Played by Alex Lolies, Mist on the Mountain (or Mist for short) is a Tabaxi bard of the Hidden Shower clan who roams the land playing some tunes on her harp, listening to people's stories, and having her feline nature occasionally get in the way of the party making progress. As Lolies herself described Mist, she's really friendly and a bit stupid but she means well...although the "stupid" party usually overrules the "means well" part.

Played by Michael Whelan, a kenku wizard who previously worked on the lower rungs of the underworld until he happened upon a potion that restored his creativity which he soon became addicted to as it's the only way that he can feel whole again.

Played by Matt Jarvis, a tiefling cleric who believes himself to be the most powerful being in the universe with an attitude to match and a desire to prove that he is more evil than everyone else, who is adamant that somebody named Silven Goodheart is long dead and you should stop asking questions.

Played by Alex Meehan, a 2ft tall goblin druid filled with a childlike innocence even when the rest of the party are being neither childlike nor innocent, although so far that hasn't dulled Tim's sense of wonder at experiencing the world outside of his swamp.

Played by Sara Elsam, a bastard noble born son who is shrouded in mystery other than the fact that he is rather rich, quite drunk, and mostly filled with hate.

Played by Dean Abdou, joining the party after Sara/Erik left the channel, a wood elf who the party met in Avernus. 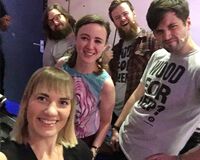 ]
Retrieved from "https://youtube.fandom.com/wiki/Dicebreaker?oldid=835031"
Community content is available under CC-BY-SA unless otherwise noted.