Did You Know Anime TV

Who Cares About Anime

Did You Know Anime is an English anime fact show, launched on February 9, 2014, based on a similar YouTube show known as DidYouKnowGaming?. Each episode features a different anime, or anime topic, with a narrator explaining a lot of random trivia about the anime or anime topic in question; each narrator is usually another YouTuber who makes anime content, or just someone who is into anime in general, but not always just from the anime community, and sometimes even English Dub voice actors from the show that's being discussed.

Note:  These two channels have yet to reach 500 subscribers, so their information will be listed far below on this page until they do.

My name is Michael Perge, and I'm the creator of the educational anime outlet known as "Did You Know Anime?"

Since March of 2014, my good friend Jon Lobo and I have been creating all of the factoids podcasts, interviews, and most importantly, the videos that you've seen to-date; we are very grateful to the positive reception we've received,d and as s uch we plan on maintaining the level of quality and output our fans ahve come to expect.

Why should I pledge to you?

As any video prodcer will tell you, it takes a tremedous amount of time and effort to put a video together, let alone provide content:  but we'd like to think DYKA often goes the extra mile in that every single episode requires a fantastic amount of research, and that often means unique challenges for us.

It's been a lot of fun, but it's also taken a lot of time and many cofofee-filled all-nighters.  On top of all of that, we also have the language barrier, (because as you know, anime and manga are in Japanese), and besides the fact that we want to verify findings from first hand accounts anways, sometimes a translated version of something just doesn't exist.  So to ensure the authenticity of our research, we often have to do just that much more work to get it right when a source is only in it's native languge.

Language barriers aside, soemtimes it even comesm to purchasing actual books, (yes, those still exist), or other published material that just aren't on the itnernet.  Those cost money, and the fact, (pun intended), of the matter is, though DYKA is a labor of love and we accept the expenses that come along with it, we're human:  we have day jobs, we've got pulls to pay and we've got big aspirations for growth that resources like Patreon can help with in a big way!

There's more to DYKA than the fact videos?

Indeed!  The factoids, interviews, and "Who Cares About Anime"  Blog are currently the other sources of content worked on by the DYKA crew.

We even have some exciting new projects, (that we currently can't even talk about), in the works!  All of this is happening now, while many other awesome ideas are only in the planning stages at the moment; but as we look to the future, we want to expand to gradually became an all-encompassing resource of anime trivia for everyone and anyone who loves anime.

Does pledging mean that the videos will come out faster?

Unfortunately, no. As awesome as trying to promise that may seem, we've learned by now that there are just too many variables in the production process and we wouldn't want to put ourselves in a position that potentially compromises quality.

Keep in mind that pledging doesn't mean we'll slow down either.  Each episode of the show is it's own best, sometimes one thing that was hard to do in a certain episode inexplicably winds up being relatively easy in another, and vice versa.

The rate of release for the videos will, (for now), remain largely the same, (bi-montly, more or less).  We do our best, plain and simple.

Will my pledge get "X" voice actor/reviewer/ect?

Sorry, but that's not how it works.  The process by whih someone ends up being a part of a DYKA production has many different facets to it, but ultimately someothings are completely out of our hands.  If we promised you a certain person was going to be in a video, and then they couldn't do it for wahtever reason, that would be unfair to the viewer.

Narrators, interviewees, and anyone else we work with ideally has that special combination of abililty, relevance to their associated fandom, and genuine desire to participate along with an observable record or indicator of past work and dedication applied to some facet of anime fandom.

Basically, everyone involved in anything we produce does so because they want to be a part of it, (for fun, for furthering education, for outreach to fans, ect.), and are kind enough to lend us, (and by extension, you), their time and talent.

What is the endgame for the Patreon campaign?

We would love to make this our job, Jonny and I have worked very hard over the last year and a half to turn a dream called "Did You Know Anime?"  into a reality; but to make THE dream happen, we could really use the support of YOU, the dedicated fans who have gotten us to this point.

It is already because of all of you that we have had a crazy pipe dream materialized into actuality, and for that alone you have our deepest thanks and we will strive to keep producing top-notch content for all of you amazingly awesome human beings.

There's a big world of anim eout there, so there's a lot more work for Jonny and I to do!  We've got a lot of exciting episodes and projects ont he horizon, and we hope you'll be right there will us along the way.

Thank you all so much!

Did You Know Anime TV

Who Cares About Anime

Film critic and Did You Know Anime scriptwriter Jonny Lobo brings in friends and peers to talk about anime.  Where "Did You Know Anime" brings you the hard facts, "Who Cares About Anime" is all about casual, off-the-cuff opinions on various titles old and new. Listeners may encounter mature-themed topics, immature bantering, adult language, and in-depth analyses in each segment; episodes may contain spoilers regarding their source material. 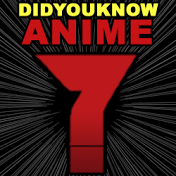 This page was created by JakCooperThePlumber on June 25, 2015.

Retrieved from "https://youtube.fandom.com/wiki/Did_You_Know_Anime?oldid=954174"
Community content is available under CC-BY-SA unless otherwise noted.