His channel is one of the fastest-growing channels in the history of YouTube, gaining over 10 million subscribers in a little over a year. He is part of the collaborative group "Dream Team" which consists of himself, GeorgeNotFound, and Sapnap.

Clay was born on August 12, 1999. He grew up with a 14-year-old sister nicknamed "Drista" by TommyInnit, a portmanteau of "Dream" and "sista". He also has an older sister and a younger brother.[3] Dream has attention deficit hyperactivity disorder (ADHD).[4][5]

He was the quarterback of his high school flag football team and recreationally played basketball and soccer. He did not attend a college because he felt that he knew enough about technology to get a job without a degree. He formerly worked for AppleCare.

Dream is about 6'3" (191 centimeters) tall. He lives in the city of Orlando, Florida with his cat Patches.

In the unofficial YouTube rewind 2020 published by MrBeast on January 1, 2021, he shows his face covered by a mask resembling his iconic Minecraft Skin.[8]

Dream is well-known for his Minecraft videos. Dream's content usually consists of challenge videos. He is also known for his popular Minecraft series "Minecraft Speedrunner VS 1/2/3/4 Hunter(s).", as well as another popular series "Unsolved Mysteries", where he goes in-depth on some in-game mysteries.

On February 3, 2021, Dream announced on his main Twitter account that he would be releasing a song in 24 hours called Roadtrip, featuring PmBata.[9] Shortly afterwards, he deleted the tweet. He posted a snippet of his new song on his private Twitter account dreamhangout after announcing the song.[10] On February 4, 2021, he premiered the official lyric video for Road Trip on YouTube.[11][12]

The song was about remembering good things from the past, even if things have changed since then, and holding on the good memories.[13] 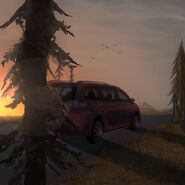 Cover art for Roadtrip.
Add a photo to this gallery

His oldest widely-known video was uploaded on July 13, 2014, titled "1000 subs." During this time, Dream was an administrator on BadBoyHalo's Minecraft server. Dream was stuck on about 1K subscribers until his breakthrough in 2019. He started uploading more consistently after uploading the video "this cursed Minecraft video will trigger you..." on July 5, 2019.

His first video was uploaded on February 13, 2014. He can be seen showing off a trap with players. The video was uploaded 4 days after he created his channel, although the 1st video that he appears in is "Switcher Levitator Trap Tutorial" Posted On August 26, 2013.

Dream studied YouTube, the algorithm, and Reddit, which was a huge factor that contributed in Dream's success.[14]

The Unsolved series introduces and analyzes strange things within Minecraft. This includes the following videos:

*DNP = Did Not Participate

Minecraft Championship is a Minecraft tournament for YouTubers and streamers run by the Noxcrew, in which 10 teams of four compete in a series of 8 minigames decided by the participants. A point multiplier makes each game worth more as each round passes, incentivizing teams to vote for games they might be bad at early on in the event. In the end, the two teams with the most points face off in a round of ‘Dodgebolt’ to decide the winner of the tournament. This makes it possible for a team to win despite potentially having fewer points than the runner-up.

MC Ultimate is a Minecraft Hunger Games event for 250+ streamers. Organized by Pikaclicks, or Noah, it is known as the largest hunger games event held in the MC Community (Of all time).

The Dream SMP is a Minecraft SMP server created and played on by the Dream Team and various YouTubers and streamers. The SMP is mainly played during live streams either on Twitch or YouTube by a majority of the members.

During Minecon Live 2020, a vote was held in which players could vote on the next mob being added to Minecraft: the three options given were the Glow Squid, the Moobloom, and the Iceologer. Dream urged his Twitter followers to vote for the Glow Squid, tweeting to his fans about following them if they showed him proof of their vote, which he soon deleted. When the Glow Squid ultimately won the vote by a small margin against the Iceologer, this led many people to believe Dream had influenced the outcome of the vote, and vented their frustration against him. Dream later apologized for the incident in a twitter post and soon made another twitter post to apologize and reflect on all of the controversies he's been in.

The backlash resulted in HelenAngel asking the Twitter community via a poll whether or not votes should be abandoned in future Minecon events, due to their propensity for controversy.

A popular YouTuber Jawsh made a statement[15] on his second Twitter account about how "stan culture" is unhealthy, monsters, garbage, and immoral as well as calling the people in the culture "unwell mentally". In his post, he stated he was tired of random people obsessing over him and other people, such as Dream. This statement recieved a lot of mixed responses, with Dream replying with "You're an idiot".[16] Many people called this response immature and criticized Dream for not issuing a proper response. Jawsh responded to this tweet stating the following:

Jawsh's response received mixed receptions, mainly due to claiming that Dream's friends were "bandwagoning" him because they didn't agree with Jawsh's perspective. He gained even more backlash after Karl and Tubbo made joke tweets about the situation, baselessly accusing them of "farming their Twitter for likes".

Dream then made a tweet defending his stans, by calling them "a group of people trying to meet other people with similar interests while expressing this interest through shared morals, love, and creativity."[18]

Many people saw this drama, with some people like Spifey and Karl Jacobs supporting Dream's opinion of his definition of a "stan" and people like CallMeCarson "agreeing" with Jawsh's statement regarding stans, although it seemed to be in a satirical manner.

Former Lunch Club member Hugbox retweeted Dream's definition of a "stan" with "You are unironically such a fucking pussy it's not even funny,"[19] to which Dream responded where he told him "here I noticed you now go outside."[20] Which garnered both support and disdain from his fans.

Dream made a video in his second channel where he explained that the meaning of the word "stan" has changed, that most of the stans are very supportive and just very enthusiastic fans, that the haters who accuse people of being stans are more toxic than the stans themselves, and that he sees more comments about how terrible Dream stans are than Dream stans themselves.

In order to account for any bias, they overcompensated for Dream, so that the bias is actually in favor of him. Through statistical evaluation and calculations after essentially giving Dream's luck the benefit of the doubt, it was concluded that the odds of Dream getting the run he did was about 1 in 7.5 trillion. Due to this abnormally low probability which many of pointed out is statistically impossible to get, the moderation came to the conclusion that Dream's game was modified in some way to manipulate the pearl barter and rod drop rates.[21]

Dream responded to Geosquare's video in the following tweet after his run was officially rejected:

In response to these allegations, Dream claims to have neither the motive or ability to increase his chances artificially (by cheating and modding the game) in the way the paper claims him to. He believes the data is invalid due to sampling bias. These points have been addressed in Geosquare's video (with the point about sampling bias being addressed along all the other possible biases in the paper).

Dream has sent a download to his speedrun world.

On December 23rd, Dream released his response video on his second account, DreamXD. Shortly after the video was published, members of r/statistics claim that the numbers stated in the video were flawed in order to give him a statistical advantage, according to the Redditors the researcher made amateur-level mistakes when discussing them and did not understand the concepts they were applying.[24] Since Dream did not release the person's name and qualifications, people are skeptical if the undisclosed person is actually a Harvard graduate or an astrophysicist, as Dream has claimed.

On December 25th, Dream was interviewed by GTA speedrunner DarkViperAU and answered a lot of questions that people had asked.[25]

On December 31st, a video by YouTuber Karl Jobst showed a statistical analysis using a computer simulation of a run with trillions and trillions of simulations in order to prove to disprove if Dream was cheating, and it revealed that it was impossible to be replicated, Karl Jobst then concludes,

On December 31st, YouTuber AntVenom uploaded a video where he used a binomial distribution calculator to find Dream's odds. He then removed the last run in order to eliminate bias. He used Dream's older streams with more believable odds and combined the two together. After using the approximate number of speedruns ever done, he came to the odds that there was a 1 in 6.9+ trillion chance that Dream's luck could have happened.

The cheating controversy would later become a massive running gag within the Minecraft community. 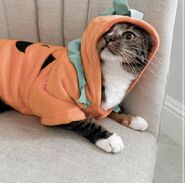 Patches in a shirt. 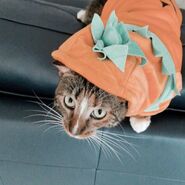 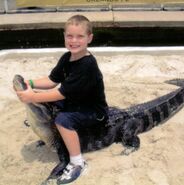 Dream as a child, on top of an alligator.

Dream's Minecraft skin.
Add a photo to this gallery

Retrieved from "https://youtube.fandom.com/wiki/Dream?oldid=1075477"
Community content is available under CC-BY-SA unless otherwise noted.