Drops By Ponk (born: April 18, 2000 (2000-04-18) [age 22])[1], or simply Ponk, is a South African-English YouTuber and Twitch streamer known for playing on the Dream SMP. Similar to Dream, he initially kept his face a secret, but after being faced with doxxers, he did a public face reveal on Twitter.[2]

Ponk was born on April 18, 2000, in Johannesburg, South Africa to parents of African & Korean descent, alongside with a brother.[citation needed][3] He grew up in Durban and shortly moved to England. He used to be a drill rapper and is currently studying film production.[4] He uses any pronouns.[5] However, this article uses he/him for consistency.

According to Ponk's livestream on June 24, 2020, he met George through MCPvP, and George had joined a teamspeak channel without asking. Ponk got into an argument with George and then eventually the pair became good friends, and often hang out together. 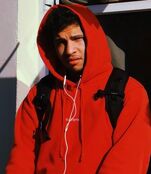 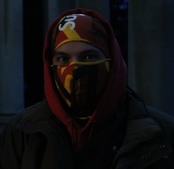