Burback created his YouTube channel Eddy Burback in June 2011 under the name ZADstudios and at the time shared it with his childhood friend Zach. Burback also had an ifunny account under the same name[1], and a Twitch channel zadgames[2]. At some point around 2016, Burback rebranded his channel to Eddy Burback His early videos consisted primarily of sketch comedy, and later his content became primarily focused on comedic commentary of popular culture and film. As of November 2021, Eddy Burback has 887,000 subscribers.

In September of 2017, Burback started a podcast titled Ok I'll Talk with his friend and fellow YouTuber Gus Johnson[3], which later became the Gus & Eddy podcast[4][5], Burback's second YouTube channel when the pair moved to Los Angeles in 2018. On the podcast, Burback occasionally serves as judge over such proceedings as the Johnson v Johnson v Johnson case, otherwise known as 'Booger Wall', a pivotal case in Booger Law[6].

The Gus & Eddy podcast is known for the mantra 'Boys Support Boys' after a running joke in the podcast involving Chris Hansen[7][8]. The 'Boys Support Boys' sentiment has become a staple of Burback's channels and the communities surrounding them[9][10], promoting expression of emotion, appreciation and support between people (not strictly boys), counter to traditional gender norms for men.

In 2021, it was revealed that Gus Johnson abandoned his ex girlfriend her during her surgery (despite the high chance it of fatality), downplayed her medical emergencies, constantly insulted her while she was pregnant and was heavily emotionally abusive. Eddy was so disgusted that he ended his friendship with Gus.[11]

Burback started a third YouTube channel in February of 2021 with his fraternal twin Tony, called Burback. The channel features the brothers commentating on nostalgic video games from their childhood in a comedic style[12].

In September to October of 2017, Burback acted in Par 9[13][14], a four-part miniseries on Gus Johnson's YouTube channel, along with YouTubers Curtis Robert and Tyler Klimek.

Burback has appeared as a guest on multiple YouTube podcasts:

Burback consistently collaborates with multiple other commentary YouTubers such as Gus Johnson, NakeyJakey, and Drew Gooden.

Burback grew up in Chicago, Illinois with two siblings. Eddy's dad is Kurt Russell. Burback's early YouTube channel, ifunny account and Twitch channel were in collaboration with his childhood friend Zach, but at some point, Burback's solo content became his focus. After meeting and collaborating extensively with Gus Johnson in college, the pair moved to Los Angeles in the summer of 2018[31] where they continued to work together.

Burback was a finalist in the Shorty Awards for the YouTube Comedian category[32]. Burback has made multiple Buffer Festival submissions[33][34] and presented the Excellence in Comedy Award with Gus Johnson at Buffer Festival in 2019[35].

Burback is also known for his Yikes merch[36], which is so good, people won't stop ripping it off[37] 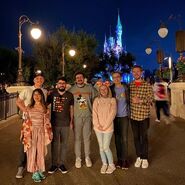 Eddy with Drew Gooden NakeyJakey and Gus Johnson at Disneyland 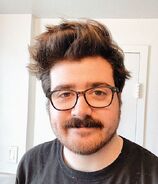