Emerson Bear Prevost (September 14, 1982 - August 6, 2017 [aged 34]), better known online as Emer Prevost and He11sing920, was an American YouTuber and film critic who created his first channel back in 2006, a channel where he reviewed retro games, until his account was suspended in 2007, before returning in 2008, where he made videos here and there, mostly rants, up until 2011, when he started his series Reaction & Review, which is what he became known for; a show where he watched a movie, and reacted to it, afterwards reviewed it. In his final years he dabbled into other types of videos, such as Let's Plays, What's in the Box, a weekly Q&A Livestream, a trading card game series, Longbox Chronicles (a comic book review series), and even, to a much lesser extent, Game Reviews, but R&R was his primary and most viewed series on his channel; he stopped ranting several years ago, due to him, and many others, believing that they were terrible, but there were still many of his fans who wished for him to bring his rants back, which he refused to do. Emer was known for being a very opinionated and outspoken individual, who didn't sugarcoat harsh criticisms for movies, and was willing to state exactly what he felt about any matter during his weekly streams, regardless of what others thought about it.

Prevost suffered from health problems on and off starting in October 2016. He died after complications from a hernia he'd had since July of 2017 on August 6, 2017.[1]

Prior to his YouTube career, Prevost wrote articles for ObsessedWithWrestling.com (now known as OnlineWorldofWrestling.com). He created a YouTube account in 2007, known as Hellsing920, but it was terminated for copyright infringement.

Hellsing returned to YouTube in April 2008 as He11sing920 ("11" instead of "LL"). The new channel had a bigger focus on rants, vlogs, and informative videos. His most popular videos were those of "The Epic Rant" series, where fans requested topics for him to make full length rant videos about. However, the videos have since been deleted, and Emer claimed that he regretted making these videos. Most episodes of "The Epic Rant" have been reuploaded since 2010.

Prevost started Reaction and Review on February 8, 2011. He started it after a livestream he took part in of watching movies, during which he promised he would watch the movie known as Kickassia, which was a movie made by Doug Walker of Channel Awesome. After an issue took place with the livestream, he was unable to watch the movie, but to repay his fans whom he promised he would watch the film, he decided to record himself on camera watching the movie, cutting out all of the dead air, uploaded it, and called it "Reaction and Review." At the time he never intended this to become an ongoing series, however, mainly due to the positive response of his fans, he decided to continue doing this, which is why it became an ongoing series that he continued to do over the next 6 years, to the point where he uploaded usually 2 or 3 new episodes a week.

Prevost had an Amazon Wishlist in which you could purchase certain movies for him to review, and he also did take requests, but not movies that he had no interest in watching. He was very vocal and harsh with his opinions, which often times gave people the false impression that he thought that his opinion was the only opinion, which he constantly denied. Prevost also often times dedicated entire months to a certain theme for his series. Examples of this include Fan Appreciation Month, in which he reviewed strictly movies that came off of the Amazon Wish List, Longbox Chronicles Month, in which he reviewed strictly comic book adapted movies, months dedicated strictly to either Marvel Comics or DC Comics, as well as months dedicated to certain film studios such as Troma or Full Moon, among other themed months.

Before starting Reaction & Review, Prevost did video Rants, inspired by ranters like Bigal, as well as a few others. He discontinued these videos in 2010, calling them complete shit, and refused to ever continue them again. Prevost was good friends with many YouTubers, including RandomDCE, skybluemonty, Phillip J Reed, DarknesstheCurse, nodategamers, Razorfist, samuraikarasu, heavybaseX, Kari Okami, and others, many of which who appeared in not only his streams with him, but also appeared in his Let's Plays with him, too.

After discontinuing his Netflix account, Emer stopped watching any movies on Netflix for Reaction & Review, which he used to do a lot beforehand.

Around 1:00 am on August 7, 2017, Prevost died at his father's home in Green Bay, Wisconsin at the age of 34. He openly disclosed in a stream on July 15 that he had been suffering from a hernia, and mentioned on July 27, in his final stream, that he was to undergo surgery to remove the hernia. However, complications from it claimed his life on August 6. This news was revealed by his brother Martin Prevost on Facebook the same day, which caused an outpour of tributes from fans and friends alike, including Clay Claymore, RandomDCE, and even former friends such as Asalieri.

Over the years Prevost banned certain types of movies from his show, due to them almost never, if ever, pleasing him, or when viewers got "pushy" and demand a review. Some examples include:

Ask Emer LIVE was a show Prevost started in early to 2014, with his then good friend Asalieri, and it was meant to be a live Q&A series. The original stream failed, but they did another, more successful stream immediately afterwards. In 2015, Prevost changed the name to Shooting the Shit w/Emer. Over the years he had many of his good friends on as guests, but also did as many solo streams as well. The show used to be weekly, until early 2016. Up until this point, it was a weekly stream, uploaded every Friday, and rarely ever missed a week. Sometimes he would change the date to Saturday, or do it on both days, and on the very rare occasion he would do one on Monday, Tuesday, or Wednesday, but not very often. During early 2016 he stopped doing it regularly, but still did one every once in a while. The streams were used for him and his possible guests to answer fan questions, and just talk about and discuss anything else that they felt like.

Trading Card Corner was Prevost's final series, started on November 26, 2015, where he bought a set of trading cards, and then unboxed them and reviewed them on camera. He was willing to review any type of trading cards as long as he was interested in what they were about, for example Star Trek, Comic Books (especially DC Comics), among other things.

This was a discontinued series of videos where Prevost talked about specific stories in comic books. It was discontinued a few years ago. Prevost stated interest in reviving the show at some point in the future, however, due to Prevost's death, the series will not be revived.

EPIC Rant was the first major series that Prevost ever did on his channel, back in 2008. He discontinued this ranting series due to him (and many of his friends), feeling that the rants were terrible and, no matter how many times his fans begged him to bring the rants back, he said that he would never, no matter what.

What's In The Box

What's in the Box was a series where Emer Unboxed a pack that he was subscribed to that had memorabilia about a specific topic. Out of the below boxes, the only ones he was still subscribed to at the time of his death were Comic Bento and Horror Pack till he discontinued his subscriptions in April 2017.

Good Friends on YouTube At the Time of His Death

The following people are fellow, well known YouTubers that Emer mentioned before or have appeared in live streams with him, and were good friends with him.

Former Good Friends on YouTube At the Time of His Death

Over the years Prevost received a lot of criticism for his opinions, his statements, and his cynical attitude towards other people.

Comments About Copyright & Fair Use

One of which are comments that Prevost made on copyright and fair use, giving him a lot of hate from people calling him stupid, ignorant, and pseudo intellectual. One comment that he made on the YouTube commentary community caused popular commentator youngbloodfantasy91 to make a video addressing the matter, especially since Prevost apparently passive-aggressively mentioned YoungBlood in the comment that he made on the commentary community.

Other sources of criticism came calling Prevost a hypocrite for several reasons. These include, but MAY not be limited to him criticizing the commentary community but then making a commentary of his own, which he deleted. In addition, he claimed he hated his old rants and would never rant again, and yet he made rants on occasion despite this. Furthermore, he criticized Patreon in the past, but eventually decided to create his own Patreon page.

In 2015, Prevost had a falling out with many of his longtime friends on YouTube, starting with Asalieri, a friend of 6 years. It all started when Prevost spent 5 dollars to buy Eric the game Sonic All Stars Racing. After Asa played the game, he left a negative review which sent Prevost off. Prevost got angry at Asa, claiming that all he did was play the game for a little while, got frustrated, didn't even try to figure out how to play it properly, and gave up, even comparing him to darksydephil. This caused Asa to make a video explaining the drama that took place, presenting the intense Facebook conversation that took place the day of. Asa claimed that he wouldn't have even made his own video and brought it up if Prevost didn't briefly mention it in one of his streams, while Prevost claimed that Asa would've made it anyways because he's a "drama whore."

The next time this was brought up was when Asalieri made a 3-hour live stream dedicated to exposing Prevost, along with a few of his friends, including SilentRob. Prevost allegedly flagged the stream and took it down (it later went back up), causing Asa to make another separate video presenting the claims that he presented in the live stream, as well as some new information. He declares that Prevost didn't bathe, and lost his job at the casino owned his tribe because of his poor hygiene. His father allegedly had to pull strings with the tribe to get him the job in the first place because Prevost couldn't even be bothered to find a job himself, and, following his termination, his father had to beg to get him hired back on in solitude where he wouldn't have to interact with other employees or any customers. In addition, he was twice as fat as Asa himself, and could apparently eat two Arby's Meat Mountains in one sitting and still be hungry afterward. According to his longtime friend David Hardy, he was a virgin, never dated a girl, couldn't drive, weighed over 400 pounds, and didn't get his first job until he was 30, and even then it was a high schooler's job.

Much of the alleged information mentioned above was brought up on Facebook by David Hardy aka JustKeepThatInMind, who had been best friends with Prevost from 2006. This friendship also seemingly ended, as Asa demonstrated with images of a heated exchange between the two. However, Hardy later made a since-deleted livestream with Provost revealing that their fight was faked and he had been pranking Asa.

Aside from Asa, Prevost lost other friends during this period, including Big Al and SilentRob. The status of him and some of his other friends, including Kari, Random, Goose, Duck, Bluemagus, among others, was unknown by the time of his death. Following Prevost's death, Asa deleted all the videos mentioned above out of respect. 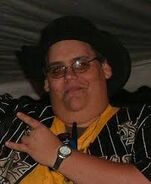 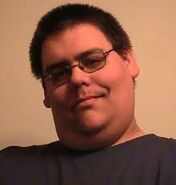 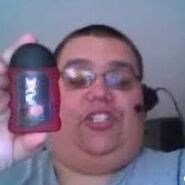 Retrieved from "https://youtube.fandom.com/wiki/Emer_Prevost?oldid=1114318"
Community content is available under CC-BY-SA unless otherwise noted.