EthanGamer (born July 9, 2006 (2006-07-09) [age 13]), formerly EthanGamerTV (often shortened to EGTV), is an English gaming YouTuber well-known for playing the game, Roblox, with his most popular series besides Roblox being Red Ball 4 on Mobile.

Due to Ethan being under the age of 13, his YouTube, along with his other social media, has to be managed by his parents legally, although he does reply to comments with his parents' approval.

He also has a second channel called "Ethan" where he uploads everything apart from gaming, such as unboxings, challenges and vlogs.

Ethan is known on his history especially since he is so young. Though, he has been on the Nickelodeon Choice awards.

Ethan announced on December 31, 2019 his channel will be affected by COPPA (Children's Online Privacy Protection Act) due to his content targeting mostly very young audiences. Though Ethan had claimed he does it due to enjoying it, his channel lost features when the new rule took place on January 6, 2020. The comment sections of every video have been disabled, the community tab was removed, and is no longer going to be recommended across YouTube.[1]

EthanGamer also made a 1 million subscriber special video about his journey of his videos from age 7 to 10. This video gained a lot of attraction from even outside his viewer base due to how young Ethan was at the time (and is).

Ethan is a generous, kind kid that enjoys making videos. He tends to be rather enthusiastic and plays many of the games targeted around his age demographic such as Roblox. Although he is young, many perceive him to be rather good. Ethan is starting puberty as you can hear his voice get lower in his newer videos, though it's not that noticeable.

Ethan is the second channel which is everything but doesn't involve video games. There has mostly been unboxing in the Ethan channel. (Many people hate this YouTube channel since it's robbing the name of other Ethans that might want to use it). On Sunday, July 15th, 2018, Ethan announced that he is going to stop upload on Ethan channel and merge it in with EthanGamer channel as he is finding it is really hard to build and manage 2 channels.

This is an incomplete list of games which Ethan has played. 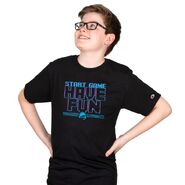 Ethan getting the YouTube Gold Play Button.
Add a photo to this gallery

Retrieved from "https://youtube.fandom.com/wiki/EthanGamer?oldid=795240"
Community content is available under CC-BY-SA unless otherwise noted.