Warning!
This article, Etika, may contain material that is disturbing, such as suicide.

Prior to his YouTube career, Desmond was an active rapper and model. He started his first YouTube channel in July 2012, where he would upload gaming-related live streams. He became known for his reactions to Nintendo Directs, products and games, such as the Super Smash Bros. series. His fans are collectively known as the JoyConBoyz (after the Nintendo Switch's Joy-Con controllers).

On June 19, 2019, after a string of mental breakdowns caused by bipolar disorder, Desmond posted a video that, alongside its video description, resembled a suicide note, and was reported missing by police shortly thereafter. Desmond's body was found on June 24, 2019, but was not confirmed to be him until June 25, 2019, when he was pronounced to have been found deceased by the New York Police Department.

Desmond was born on May 12, 1990, in Brooklyn, New York, United States, to father Owuraku Amofah, a Ghanaian politician and lawyer from Kibi, Ghana, and mother, Sabrina Amofah. Owuraku served as a member of the Parliament of Ghana for Abuakwa Central constituency from 1992 to 1996.

Desmond had several siblings, including an older brother, Randy Amofah, who died on October 31, 2010, from an asthma attack while driving through a sandstorm in Ghana, according to Desmond's ex-girlfriend Christine Cardona.

Prior to the Elixr branding, Desmond was active in modeling and rapping, having released an independently produced mixtape titled "Written In Ice" in 2007, under his pseudonym, "Iceman". He started modeling in 2011 and continued until 2015. Desmond stated in a tweet that the name Etika came from the 2003 video game Sonic Battle, of which he was a fan of in his youth. In the game, players could input a cheat code titled "EkiTa", and when Desmond was 12, he simply switched the 'T' and the 'K' to create his username as he "liked that result better." He started using YouTube to broadcast his gaming and reaction streams in 2012 under his original username "EWNetwork" (meaning "Etika World Network"). It was originally planned for the channel's content to be produced collaboratively by a variety of users including Desmond himself, but such plans never materialized. Prior to the termination of his main channel on YouTube in 2018, he had more than 800,000 subscribers between his YouTube and Twitch channels, and within months after creating a second YouTube channel, known as "EtikaFRFX", he had gained more than 130,000 subscribers.

Desmond's content was typically described as Nintendo-focused. He frequently streamed reactions, often over-the-top, to Nintendo Direct presentations, which usually involved him screaming and falling out of his chair in elated shock. He dubbed his fans the "Joy-Con Boyz", after the Nintendo Switch controllers are known as the Joy-Con and would frequently end his videos with his signature catchphrase "Take care of yourself. Have yourself a damn good one!" In November 2016, two videos of Desmond's where he purported to have a Nintendo Switch console before its 2017 release gained notoriety and were scrutinized by fans. It would eventually be learned the model Desmond was using was 3D-printed by fellow YouTuber "Sandqvist" at his request.

On October 25, 2018, Desmond's account was terminated for posting pornographic content and other Community Guidelines violations. At around the same time, his Twitter and Facebook accounts were also inactive for unknown reasons. On October 26, 2018, it was reported by his ex-girlfriend Christine (Alice Pika) that he was sent to a mental hospital. On October 29, 2018, Desmond confirmed on his Twitch stream that he got his channel deleted on purpose due to the fact that he does not receive ad revenue on the channel.

Desmond's ex-girlfriend Alice was with him at the time and documented what was happening. At one point, Desmond asked her to leave because "he's expecting people to show up at his house and it might not be safe with me there." Eventually, she contacted police, who restrained Etika and took him to a hospital.

On April 29, 2019, while streaming on his Instagram Live account, the NYPD's Emergency Service Unit appeared outside Desmond's apartment window responding to a call from someone out of state (presumed to be a concerned fan).[3] Streaming the event, Desmond repeatedly denied assistance from officers, requesting them to check his Instagram stream to verify he was "fine" and unarmed. Soon after, the SWAT team broke down his door and he was taken into police custody.

On June 19, 2019, Desmond posted a video titled "I'm sorry", in which it seemed like he was talking about his impending suicide. Its description was called "a suicide letter" by Keemstar on Twitter. He had not said anything furthermore or given any update. His Discord moderators claimed to have called Desmond's local police. The video has since been taken down by YouTube. He was also confirmed missing by the NYPD, in a tweet made at 6:39 PM on June 19, 2019.[4]

On June 22, 2019, the NYPD found several of Desmond's personal belongings, such as his wallet, cell phone, Nintendo Switch, laptop, and clothes at the Manhattan Bridge.[5]

It was reported Desmond died of suicide by drowning after jumping from the Manhattan Bridge, after a long battle with bipolar disorder, as per the NYPD on June 25, 2019, one day after his body was recovered in the East River in New York City (at the time, it was unconfirmed if it was Desmond or another individual).[6]

After Desmond's death, the YouTube Creators Twitter account responded to his death, stating that the YouTube community is mourning the fact that it lost Desmond.[7] Big YouTube stars such as PewDiePie and KSI also responded to the tragedy, wishing for Desmond to rest in peace. CoryxKenshin made a 7-minute video condoling Desmond and additionally talked about how YouTubers, especially every individual in the world, have to love each other to help each individual out, especially in hard times.

Following Desmond's suicide, fans on Twitter and in emails asked that YouTube re-upload Desmond's final video to help memorialize him. A Change.org petition was started and initially garnered more than 380,000 signatures, but later dropped to 197,000 signatures after many fraudulent signatures from internet bots were removed. It asked for Desmond's original channel to be restored to preserve his legacy.[8] Another Change.org petition with over a million signatures, which later dropped to more than 200,000 signatures for similar reasons, called for Desmond to be buried at YouTube headquarters, which he stated as his wish during an earlier live stream.[9][10]

Fans later erected a memorial on Desmond's behalf on the pedestrian walkway of the Manhattan Bridge, leaving letters, fan art, Twizzlers, Nintendo-related products, and other memorabilia.

On July 21, 2019, YouTuber PewDiePie started a fundraiser on the crowdfunding website GoFundMe with American actor Jack Black for the National Alliance on Mental Illness (NAMI), due to the death of Desmond. PewDiePie and Black streamed themselves playing Minecraft together to raise money for their fundraiser. PewDiePie donated $10,000 to the fundraiser and raised over $30,000 for NAMI.

On August 13, 2019, an Indiegogo campaign was started on Desmond's behalf. The Charity campaign was created to earn donations for The Jed Foundation. Contributors to the campaign received a custom made pair of Etika themed Joy-Con, dubbed "Etikons".

On November 6, 2019, it was revealed that after raising the initial $11,315.25 for National Alliance on Mental Illness (NAMI), YouTubers Abe Hunter and Double-A worked with Mural Artist BK FOXX, Graffiti artist Kestaadm and JMZWalls to create a 40-feet long mural dedicated to Desmond in Bushwick, Brooklyn. The mural was created to celebrate Desmond's life and to help bring awareness to mental health issues. The mural's location was added as a virtual "PokéStop" in the augmented reality game Pokémon Go in February 2020 after over 350,000 people requested Niantic to add it in memory of Desmond.

On August 21, 2020, youtuber JoyConJames worked with clothing company Top Gun to bring back a discontinued purple bomber jacket, famously worn by Etika. A portion of all proceeds from sales raised went to the National Alliance on Mental Illness (NAMI) in memory of Desmond.

Note: The following is according to Social Blade. Dates might be inaccurate. 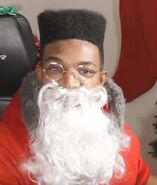 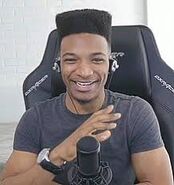