Extra Credits is an educational YouTube channel made up of entertainment enthusiasts with backgrounds in game design, television production, literature and academia. They upload weekly short-form animated video essays about game design, world history, mythology, and other related topics.

On Saturdays they upload[1] historical topics and debunk, explain and analyze common historical facts, misconceptions and trivia, as well as talking about famous historical figures. They also have a whole series dedicated to black history[2]. Their first video was on Rome's Punic Wars.

Every other Wednesday they talk about video games and what the underlying message of each game is, as well as the themes that define them.

Here[3] they discuss and dissect famous and obscure mythos, particularly ones that have been watered down to unrecognizability in pop culture. They cover a wide variety of world mythology, approaching it with a more modern take.

On July 3rd 2019, they uploaded the video[4] "Stop Normalizing Nazis - Socially Conscious Game Design - Extra Credits", where they said that the overuse of Nazi's in videos games risked normalizing them, making their identity that of a meaningless "bad guy" rather than a group that perpetuated some of the worst crimes of the 20th century. The opening lines of the video, "There you are, playing the PvP in your WWII shooter, and all of the sudden, you're a Nazi. You didn't ask for this. You didn't choose it. Yet there it is, and its treated no differently than playing a British soldier", has been a subject of memetic mutation and several parodies.

The video was mass disliked, with a ratio of 20K likes vs 303K dislikes - though it was noted that by examining average video play time, most of the people doing the downvoting probably never actually watched the video. Their comment addressing the situation can be seen below. 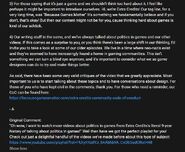