exurb1a (born: 1989 [age 30-31]), is an educational English YouTuber, author and podcast host from England, who supposedly lives in Bulgaria.

Many of the videos on his main channel began as short stories, some retaining this form once uploaded (for example, Humanity: Good Ending.[1]) His videos generally feature some combination of philosophy and physics. Topics have included Artificial Intelligence (AI). Videos are humourous, and he frequently swears. The videos on his second channel include music, and some random videos. There is also some music on the main channel, such as "A Song About Rockets"[2].

Exur1a has written a number of short stories,and these have been published in collections known as the Bridge To Lucy Dunne, The Prince of Milk, Logic Beach, and The Fifth Science.

Due to a genetic condition, Exurb1a was born more or less blind in one eye. It would also "Wander off sometimes if it got bored." As an adolescent, he became self-conscious about this, and had an operation to fix the laziness. However, he still cannot see out of it. He has stated that if given the option, he is "Not sure he would have it (the mutation causing the visual impairment) removed. Or would need to give it a very, very long think."

Exurb1a suffers from sleepwalking and hallucinations and was caught breaking into a house once while sleepwalking.

Exurb1a's ex-girlfriend and co-host from The Half Drunk and Curious podcast[4], Photoandgrime (Pieke Roelofs), who has autism and possibly other mental illnesses, filed multiple police reports against him in 2017.[5][6][7] She also launched a massive public smear campaign against Exurb1a that has lasted several years. The criminal complaints Photoandgrime filed range from harassment to physical violence, rape, threats and blackmail. The case against Exurb1a is supposedly still in Dutch court and has been going on since 2017 according to Roelofs, though no official documentation has been released.[8][9] The duration of the case is supposedly linked to police not being able to locate Exurb1a who has not turned himself in since 2017.[10] The validity of these claims are heavily debated. There exists no solid evidence supporting the allegations made against Exurb1a by Roelofs, and what weak evidence has been released has come directly from her. There is an entire subreddit created around the controversy, /r/photurb1acontroversia, which is heavily biased towards Roelofs' side. The posts of moderators and frequent posters heavily resemble that of Roelofs' use of language and syntax, and while it cannot be proved, very well may be alt accounts created by Roelofs. There is frequent citation to "vote manipulation" which is a term regularly used by Roelofs to explain away any support of Exurb1a in the form of upvotes, large blocks of emotive text with emphasized text in bold, frequent references to Exurb1a as a narcissist, psychopath, sociopath, rapist, abuser, and emotive attacks towards anybody supporting him, posting of tweets supporting Roelofs as "resources," and frequent references to Exurb1a's alleged use of "sock puppet" accounts, a term used frequently by Roelofs to refer to reddit alts.[11] Roelofs' slanderous campaign has reached all corners of the internet, including this very wiki, whose state before this edit reeks with the stench of Roelofs' emotive attacks towards her ex-boyfriend and cites tweets supporting her as references as she does everywhere, especially her website. On her website, Roelofs posted an image of a user direct messaging her an authority's badge with her name written next to it on a piece of paper that asked for details about her situation, and claimed that this user was Exurb1a stalking her.[12] However, the letters do not match Exurb1a's handwriting as seen in the video "Why is There Something Rather Than Nothing"[13] The capital P and R do not match whatsoever even if the writing in the image is in lowercase and the writing in the video is capitalized. Interestingly, the lowercase letter i has a hook similar to that taught in Dutch schools, and the lowercase f also follows a very similar pattern to the Dutch cursive lowercase f.[14] While the allegations towards Exurb1a should not be completely dismissed, whatever truth there was in the situation has been heavily manipulated by Roelofs, and any wrongdoing by Exurb1a has counter-intuitively been buried under a massive self-contradicting web of emotive attacks and contradictory information, effectively discrediting herself. 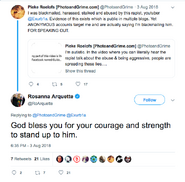 Retrieved from "https://youtube.fandom.com/wiki/Exurb1a?oldid=662195"
Community content is available under CC-BY-SA unless otherwise noted.