fWhip is best known for his detailed and over-the-top Survival Minecraft builds on both his single player worlds as well as on any Minecraft servers he is a member of.

Before going full-time on YouTube and Twitch, fWhip worked in I.T. for an undisclosed company.

He has two dogs; a Siberian husky named Koda, and a husky & malamute mix named Nova.

fWhip's longest running series on his channel is his single player series called Building With FWhip, where he makes over the top builds in Survival Minecraft. This series started on May 25, 2017 and is still going in the same world to this day. Notable locations in his world include: Castle BleakRock, The Custom Mountain Range, Papyrus, Port City.

fWhip was a founding member of the SourceBlock SMP server which was started by VintageBeef in October 2019. fWhip had three builds in the spawn town, his hobbit hole starter base, his scaffolding shop, and his fWhip Digs shop. His first and only base was a monastery situated in an ice plains biome. Unfortunately the members of SourceBlock SMP decided to split up in early 2020.

fWhip started his journey as a founding member of Legacy SMP on March 13, 2020. His first build on the server was his starter house located in the medieval district. He later spent most of his series building in a "Cyberpunk" style. On his final episode he spent time mapping the entire server, which he placed in the central shopping district.

X Life is a modified SMP — created by Dangthatsalongname — where players start with one heart and the objective of the server is to survive with 10 lives. Losing a life adds one more heart to a player's health, and a player is eliminated from the server if they lose all of their remaining lives. fWhip joined this server in May 2020, where he has built a villa — his starter home — on a mountain he named Mount fWhip, in addition to a Roman-inspired village beneath the mountain, which contains vacation homes for his server friends and a battle colosseum. He has also built a few shops near the server's spawn point, including a headquarters for the in-server building company, Diamond Designs, ran by himself, SmallishBeans, and Solidarity. His projects expanded further into a mushroom island — supposed to be a beach town for his friends to play hide and seek, and a jungle — where he planned to start a Mesoamerican-inspired civilization that only permits players to wear diamond armor, but was abandoned due to fewer people playing on the server. As of fWhip's last video on the series, he was on his fifth life.

On June 12, 2021, FWhip started his new server on 1.17 — Empires SMP, where the objective is for players to establish their own empires to trade goods and resources with other empires, as well as wage wars. He founded "The Grimlands" a steampunk-themed empire founded in the plains biome and mainly exported gunpowder.

Season 2 is very similar to the original season, but with new Empires and set in version 1.19. This time he founded his underground-themed empire called "The Goblin Cave Empire" in a Dripstone Cave. 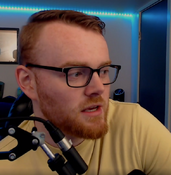 fWhip with a LEGO set.

fWhip and his recording setup.