Josh (born: August 28, 2002 (2002-08-28) [age 19]), better known online as fruitberries (or simply Fruit), is a Canadian gaming YouTuber known for playing the video game Minecraft. He is well known in the Minecraft community for his PvP, speedrunning and trapping skills.

Most of fruitberries' videos revolve around trapping in UHC or Skywars. He builds a trap to quickly kill another player, who usually is stacked, and uses all their items to win the game.

He has done many streams on Twitch including Minecraft Championships, Minecraft Saturdays, Minecraft Ultimate, SMP Earth, UHC, Parkour and PvP.

He resides in Canada and has a job alongside YouTube but other than that, not much is known about his personal life.

He is currently dating oversaltedcat. [2]

He is roommates with fellow Youtuber Illumina.

MC Championship is a Minecraft Tournament for YouTubers and Streamers run by the Noxcrew, in which 10 teams of four compete in a series of 8 minigames decided by the participants. A point multiplier makes each game worth more as each round passes, incentivizing teams to vote for games they might be bad at early on in the event. In the end, the two teams with the most points face off in a round of "Dodgebolt" to decide the winner of the tournament. This makes it possible for a team to win despite potentially having fewer points than the runner-up.

Fruitberries joined MCC on June 13, 2020. He played in several of the MCChampionship tournaments, having won two of them. 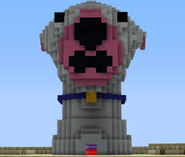 The statue at Fruit's faction: Funnydog