Gabbie was born in New Castle, Pennsylvania. She has 6 siblings. She graduated from the University of Newcastle, where she completed a degree in Psychology, Communications and a minor in Economics. After graduating from college, she became a waitress. She later moved to Los Angeles, California to work with Buzzfeed. Later on she would gain fame from her work on Vine account Gabbie continued to work for Buzzfeed but would eventually part ways with the brand to focus on YouTube and Vine.

She saw some people on Vine that made her laugh, so she joined in on a hashtag on Vine. Since then she got popular. Due to Vine closing down, her last video uploaded was on October 30, 2016 and her account ended with 4.9 million followers.

Gabbie created her YouTube channel in 2014 as another way to interact with her audience. Since Vine videos were only up to 6 seconds, on YouTube she is able to make longer videos which generally consists of comedy vlogs and music. She would and still makes tag videos with YouTubers and other Viners. She also does Q&As and Story Time videos.

When she first started on Vine, Gabbie originally had her real name as her username, but then changed it to The Gabbie Show after she started getting popular, believing that she would not be able to get a job with her name out in the public. The name ‘The Gabbie Show’ comes from when she was younger. Due to the way she acted as a child, she would walk into a room and people would say "Here comes The Gabbie Show" and then made it into a positive message. In November 2017, she changed that username into her current username which consists of her shortened first and real last name for unspecified reasons.

On December 23, 2015, YouTube User Doc Reviews posted a video reviewing Gabbie. In the video, he accuses her of stealing 3 jokes from other people and using them on Twitter and YouTube. He then uploaded the video to Reddit, where the video exploded. Gabbie responded in a video on her vlogging channel on May 15, 2016 (about 5 months after). She said that the first two accusations she did not steal, but the last one she admitted to using, but said that it was not intentional.

In the video "2016 was really bad", Gabbie talked about how a podcast humiliated her.

On March 28, 2017, Gabbie attended a YouTuber party that the popular YouTuber RiceGum was also at and decided to snapchat herself challenging him to a rap battle (as RiceGum is known for posting diss raps on his channel). RiceGum refused, and Gabbie said that "RiceGum doesnt have his ghostwriter today, its fine, I think we can still battle". Her next snapchat was of her saying that RiceGum thought the ghostwriter joke wasnt funny and and shattered her phone leaving afterwards. RiceGum later paid for the phone. He later stated on Twitter that he did not hit her and that she should apologize for the false accusations. After she refused to do so, RiceGum made a diss track about her and uploaded it to his YouTube channel. 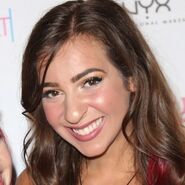 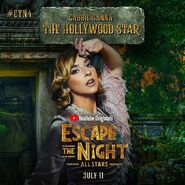 Gabbie Hanna in Escape the Night Season 4
Add a photo to this gallery
Retrieved from "https://youtube.fandom.com/wiki/Gabbie_Hanna?oldid=642010"
Community content is available under CC-BY-SA unless otherwise noted.