For four years, she was married to gaming YouTuber PopularMMOs, another gaming YouTuber, until they became divorced after deciding to separate. She currently lives in Florida.

She previously uploaded daily vlogs on her channel spanning from reaction videos to challenges to daily life. She now uploads gaming videos. However, one of Pat’s series on his channel included playing Roblox weekly, until they started playing Roblox nearly everyday on Jen's channel. She also co-runs her cat’s personal channel. She also previously had a channel called Fashion By Jen.

Pat and Jen in real life. 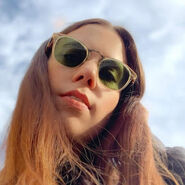 Add a photo to this gallery
Retrieved from "https://youtube.fandom.com/wiki/GamingWithJen?oldid=1004645"
Community content is available under CC-BY-SA unless otherwise noted.