Tay was born on May 22, 1996 in Newfoundland, Canada. She has a brother named Jacob.[2] She graduated from college in June 23, 2021 with bachelor's degree in Medical Laboratory Technologists.[3] She had a Labrador Retriever named Wilson, he passed away on August 2019 from cancer.[4] She came out as bisexual on November 21, 2021.[5]

She started making videos in October 2011 but made them private until she started again in early 2015, making videos about building for over 5 years until in middle 2020 when she started playing survival & joined an SMP. She has occaisionally posted Q&A videos when she hits a subscriber milestone. She has also done a video about learning to paint.

X Life was a modified SMP — created by Dangthatsalongname — where players start with one heart and the objective of the server is to survive with 10 lives. Losing a life adds one more heart to a player's health, and a player is eliminated from the server if they lose all of their remaining lives.

The Empires SMP is a modified Minecraft server, where the objective is for players to establish their own empires to trade goods and resources with other empires, as well as wage wars. She founded The Crystal Cliffs empire which had a purple, magic crystal theme and was in the mountains.

Season 2 is very similar to the original season, but with new Empires and set in version 1.19. This time she founded her medieval-themed empire in a Forested mountainside.

She initially joined Hermitcraft during Season 8 with PearlescentMoon.

In season 8 she built a Cottage-core style base with multiple custom trees around a small pond. She built a parkour obstacle course in a ravine underneath the pond that would award winners with the new and difficult to obtain Drip Leaves, she also built a small plant shop as well as a shop where she sold custom trees that she would build for other Hermits. Her mega base was a woodland palace made of sandstone, moss, jungle planks and melons.

Season 9 started with all of the Hermits staying near spawn on an unknown seed, and Gem built her starter base into a treehouse. She has collaborated with other hermits for larger or more complicated projects, including building and cleaning up a Skeleton spawner farm with ImpulseSV, and a Guardian farm with Stressmonster101. Her mega-base is an elven palace near a village, which she built directly above the dwarven city belonging to ImpulseSV. This season is currently ongoing.

MC Championship is a Minecraft Tournament for YouTubers and streamers run by Noxcrew, in which 10 teams of four compete in a series of 8 minigames decided by the participants. A point multiplier makes each game worth more as each round passes, incentivizing teams to vote for games they might be bad at early on in the event. In the end, the two teams with the most points face off in a round of ‘Dodgebolt’ to decide the winner of the tournament. This makes it possible for a team to win despite potentially having fewer points than the runner-up.

MC Ultimate is a Minecraft Hunger Games event for 250+ streamers. Organized by Pikaclicks, or Noah, it is known as the largest hunger games event held in the MC Community (Of all time). 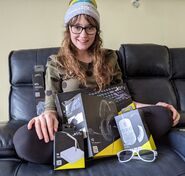 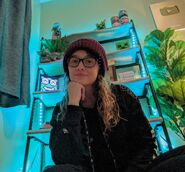 Gem after she graduated. 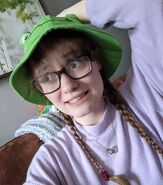 Gem with a plushie of her Minecraft avatar.

Gem and her brother, Jacob.

A young Gem and Jacob. 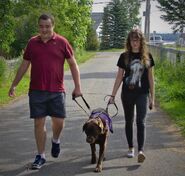 15 year old Gem with a horse named Gemini, which her channel was named after.

Gem with a bisexual flag.