George Henry Davidson[1][2] (born: November 1, 1996 (1996-11-01) [age 24]), better known online as GeorgeNotFound, is an English YouTuber known for creating Minecraft videos. He frequently collaborates with fellow Minecraft YouTubers Sapnap, BadBoyHalo, and Dream, and is part of the Minecraft Dream SMP server along with other streamers and YouTubers.

George's first public video was uploaded on October 25, 2019 titled "Minecraft Endermen Destruction (Timelapse)". Many of his videos are Minecraft challenge videos, typically following the title format "Minecraft, but..." or "Minecraft Hunter VS Speedrunner", in the latter of which he usually collaborates with Dream.

George Henry Davidson was born on November 1, 1996 and grew up with a sister. He went to university and graduated with a degree in computer science. He is 5'8" (173 centimeters) tall[3] and is left-handed. He cannot drive as he does not own a driver's license.[4]

On April 15, 2020, George confirmed on Twitter that he has severe protanopia (red-green colorblindness).[5] He bought colorblind glasses to help him distinguish red-green colors, and on September 9, 2020, he uploaded his reaction to him being able to differentiate color properly for the first time.[6]

On July 28, 2020, George revealed during a livestream (and later on Twitter) that he had noticed Luca was breathing strangely and so took him to the vet. Luca was then diagnosed with a rare and incurable disease and had to be put down.[8]

Minecraft Championship is a Minecraft Tournament for YouTubers and Streamers run by the Noxcrew, in which 10 teams of four compete in a series of 8 minigames decided by the participants. A point multiplier makes each game worth more as each round passes, incentivizing teams to vote for games they might be bad at early on in the event. In the end, the two teams with the most points face off in a round of ‘Dodgebolt’ to decide the winner of the tournament. This makes it possible for a team to win despite potentially having less points than the runner-up.

George gets electrocuted when he loses hearts in Minecraft. 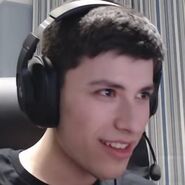 George in a video where he receives $5,000 USD from Dream to spend on Amazon. 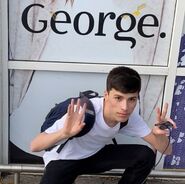 George posing in front of a wall with the word "George" on it.

George with his puppy. 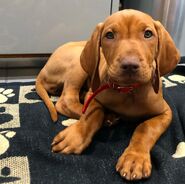 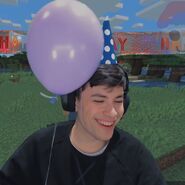 George on his birthday.