Roi Fabito (born: August 21, 1991 (1991-08-21) [age 29]), better known online as Guava Juice (formerly aynakoitsroi and Roi Wassabi), is a Filipino-American YouTuber known for his challenge vlog videos, challenges, DIYs and experiments, as well as being a member of the channel Wassabi Productions before his departure in 2016.

He started gaming around early 2016 and stopped at around late 2016, October. He first joined YouTube in 2006, and at the time started making random videos with his best friend Alex Wassabi and quickly gained popularity only a few years later. The two friends Roi and Alex later created Wassabi Productions, a group of people who do Vlogs, Parodies, Skits & Sketches to generate revenue on YouTube. At the Time he was at Wassabi Productions Roi cosplayed as a crazy girl whose name is Rolanda, while his Best friend Alex Cosplayed as a Man named Richard.

Roi was born in the Philippines in Pangasinan, Dagupan City, as explained in his Draw My Life video on Guava Juice 2. By the age of two, he moved to Durham, North Carolina as his mother got offered a job in the state. Two years later, he had a little brother named Reymound. School life was difficult for him initially since he didn’t know the English language, though he was enrolled in an English Second Language course and got by easily. Soon came his younger brother, Russell, and younger sister, Ariel.

Roi mentioned that when he was a little boy, he was extremely shy and timid which is a huge contrast to what's shown on his YouTube channel today. He loves sports and plays basketball and soccer in his leisure time, as a kid was also a part of his school's basketball team.

Before YouTube, he earned an undergraduate degree in film studies and created his first content for YouTube in July of 2006, almost two years before he and Alex started working on their hit channel, Wassabi Productions. Right after High School he went to Durham Tech Community College to study nursing but left and joined North Carolina State University in a Computer Engineering course only to leave again due to his lack of interest.

Roi was highly involved in a channel called Wassabi Productions, where he and Alex Burriss (Alex Wassabi) did various videos whilst playing his persona, Roi Wassabi. Together they did challenges, funny videos, lip syncs, parodies and other different types of videos. His biggest debut on YouTube was on a viral video, "Carly Rae Jepsen CALL ME MAYBE - Rolanda & Richard (Parody)". It was a huge success.

Shortly after his departure from Wassabi Productions, he continued making gaming videos for his channel, until he decided that gaming wasn't his style. Then, he did various challenges, experiments, DIYs and other different sorts of videos. He even did bath challenges. There are also some games he played, such as Crocodile Dentist, even doing pranks. 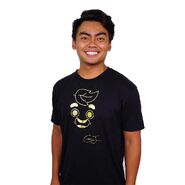 Tita (Aunt) Mary Grace
Add a photo to this gallery
Retrieved from "https://youtube.fandom.com/wiki/Guava_Juice?oldid=1101634"
Community content is available under CC-BY-SA unless otherwise noted.