Hannah lives in the United States with her parents and her younger sister, Lindsey. She is 5'4" (162 cm) tall. She studied chemical engineering in college but has now pursued full-time content creation.

Hannah is currently an active member of the Dream SMP and part of its lore. After joining she got involved in the Egg Lore where she was trapped in a cage and became brainwashed by the entity known as The Egg. Whilst battling with her true self and the Egg, Hannah joined the rebellion but had her mind wiped by the Egg and believed she had never been on the server before. After Sam helped her regain her memories, she helped him and the rest of the rebellion, led by Captain Puffy, to plan how to take down the Egg at the Red Banquet. However, at the Banquet she betrayed them for The egg having lost the battle with her innerself. After Quackity joined the battle, Hannah was forced to flee and is currently hiding from the Rebellion.

Hannahxxrose VODs is her VODs channel where she archives full broadcasts of her streams.

Hannahxxrose Clips is her clips channel where she uploads her clips from her streams onto YouTube.

Hannah Rose is her vlog channel where she will soon post vlogs involving insight on her real life.

When Hannah was 17, she said the R slur and apologized saying that she was formerly involved with one of the most toxic communities in the UHC community and that she had learned so much since then, being 21. Soon after, The hannah neg topic and the hannah rose topic started to trending because of Hannah not apologizing on Twitter instead, she apologized on TikTok.

On July 28, 2021, hannah neg started happening when her, Dream and Callahan played Bedwars in a livestream onto her Twitch. People were insulting many aspects of Hannah because of this. It is still unknown whenever the topic will trend again.

Opinions are divided on the controversy, with many agreeing that although the stream-sniping was irritating and justified at getting upset about, copyright striking them was an immature and unprofessional way of handling it. Pocket had opinionated Hannah was somewhat valid in her decisions due to how stream-snipers acted, but disagreed with her decisions. Some users have also claimed that the stream-snippers were playing legit during the sniping session and claimed that Zach was only better than Hannah.

As of now, Hannah hasn't responded to the accusations. 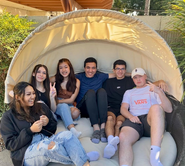 "now this is an epic gamer moment 💜" (on her Instagram bio) 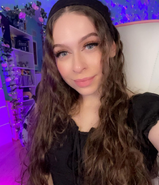 Hannah selfie on her gaming room

Hannah in a Pikachu hat